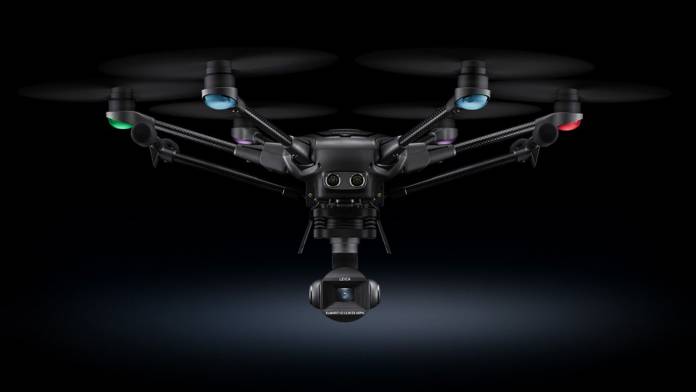 YUNEEC has partnered with Leica to release the Typhoon H3 drone. There seems there’s a lot to be excited about with this drone in terms of video and photo capture.

Co-engineered by Leica, YUNEEC’s Typhoon H3 is packing six rotors and has a powerful 20MP 4K Leica camera. That camera can shoot 10-bit YLog 4K video. Plus, it seems to be built tough. Though it is heavy, it seems fast, and with all its rotors, it has less chance of failing.

Thanks to Leica, the drone comes with an ION L1 Pro camera. This camera sports a 1” CMOS sensor that can shoot 20MP photos and record 4K video at up to 60 frames per second. For stabilization, the camera is mounted on a 3-axis gimbal.

As for the lens on the camera, it’s a 23mm Leica Elmarit-D lens with a maximum F/2.8 aperture.

The camera can shoot stills in DNG RAW and shoot video in H.264 and H.265 codecs at a bitrate up to 100mbps. It records to an SD card. There are numerous picture profiles available, including normal, vivid, WDR, B&W, and 10-bit Log/YLog.

YUNEEC Typhoon H3 looks tough and it probably is

The Typhoon seems to be as tough as it looks. The drone weighs about two kilograms with the built-in Leica camera. However, YUNEEC wants to make it clear that though it weighs a lot, it will still fly fast. Reportedly, it can fly at 72km/h (44mph). Additionally, you can fly for up to 25 minutes.

Plus, the Typhoon lowers the risk of failure with its six rotors. If one of the rotors fails, the drone will activate its 5-rotor mode so it can get back to you in one piece.

As you’d expect from a top of the line drone, the Typhoon H3 has sensors to help it avoid obstacles. There are also auto flight modes, like in DJI drones. These modes include Follow Me, Orbit, Journey and Curve Cable Cam.

Also, the drone supports a feature called “Cruise Control.” This feature keeps the drone’s speed constant, so you can focus on your framing while your drone travels at a constant speed.

How do you control the Typhoon H3?

The drone comes with a remote with a built-in 7-inch LCD screen. In total, the drone and the remote can be 2 km from each other. Additionally, it runs on Android.

The YUNEEC Typhoon H3 will sell for $2,599 and should be shipping at the end of this month. The kit comes with the drone, the camera, the controller, and two batteries. Learn more at yuneec.com.