Canon just launched the XF605 4K UHD professional camcorder. At first glance, it looks like a strong entry into the camcorder landscape for anyone involved in broadcast journalism.

Here’s what you need to know about the Canon XF605 4K UHD:

The XF605 features a 1.0-inch CMOS sensor and a DIGIC DV7 image processor. For recording, the camcorder can record 4K resolution video at 60p 4:2:2/10-bit with support for HDR. There are also dual onboard SD card slots, so you can swap out SD cards as they fill up. This is a helpful feature for live broadcasters recording the event, since you can have potentially unlimited storage as long as you have an empty SD card to swap in. You can also record in Canon Log 3, giving you access to more color latitude.

With the newly released CTM mobile app for iOS users, you can connect the XF605 and transfer video data you’ve recorded through cable or wirelessly. With it, you can transfer proxy footage, audio and metadata to servers at broadcast stations, speeding up your workflow.

When compared to the XF705, the XF605 is much lighter. It shaves off 21 ounces, in theory making it much easier to hold and carry around. According to Canon, that’s about a 25 percent reduction. It also is about 10 percent shorter in length and height.

Canon plans to release the XF605 4K UHD Professional Camcorder in mid-October for $4499. 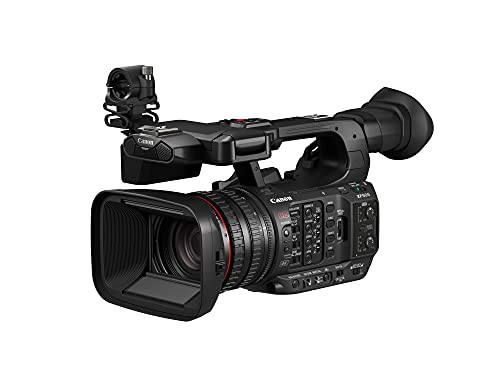