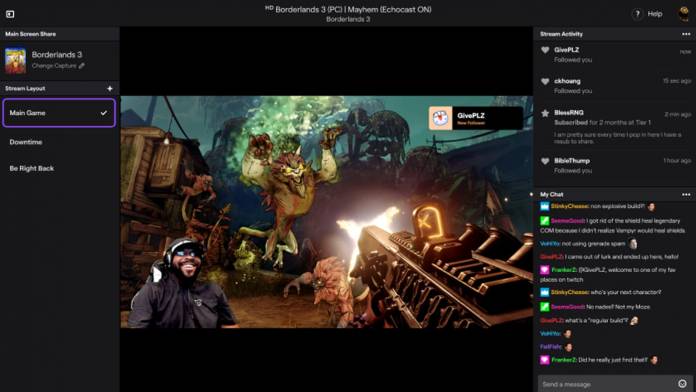 Today, Twitch launched Twitch Studio —new software that essentially helps kick-start streamers who are just starting out on the platform.

Twitch Studio is designed to be simple, so new streamers won’t be overwhelmed by complicated tools and controls. According to Twitch, it offers a quick setup process and other features that will make every stream look and sound like it was done by a pro. The software will additionally aid streamers when interacting with their online community and viewers.

How does Twitch Studio work?

Using the broadcasters’ mic, webcam, monitor resolution and bitrate, the software will guide the streamer through the entire stream setup process. It also comes with a number of premade layouts and overlays, promising a fast and easy way to personalize a stream.

The software also should make it simpler to manage a stream when a streamer is live. With built-in alerts, an activity feed and integrated Twitch chat, streamers could better interact with their communities and viewers.

The main reason aspiring streamers don’t even try streaming is that they find it’s too hard, according to Twitch. The process is complicated, so give up. Twitch hopes the new software will help get those new streamers online.

What will happen to Twitch Studio when new streamers aren’t so new anymore?

It is bound to happen. The software will be good for beginning streamers, but what happens when they no longer need help? They will eventually outgrow the software. Well, Twitch’s main goal here is to get streamers on Twitch, not necessarily on Twitch Studio indefinitely. It is very convenient for a streamer that started on Twitch to stay on Twitch.

Twitch Studio is available today in beta for Windows 7 and newer.