During times of social distanced filmmaking, multi-device monitoring is a necessary feature for many production crews. However, it’s hard to come by an affordable multi-device transmitter. Accsoon’s Cineeye 2S is a unique exception.

The Cineeye 2S is an SDI and HDMI camera-top 5GHz transmitter capable of accepting and transmitting 1080P video up to 60fps from any modern mirrorless, cinema, or professional camera. In total, Accsoon’s Cineeye 2S supports up to 4 iOS or Android devices at a range of up to 150m (about 500ft). The device will work well for socially distanced productions, allowing people like the director and producers to see the image live on set at a distance. Once connected to a smartphone, the Cineeye 2S streams footage to YouTube and other networks through RTMP. So, if you’re working with remote clients, they will see what’s happening on set.

The Cineeye 2S transmitter’s signal strength, stability, and average latency outperforms its competitors. The device’s average latency is less than 60ms. At $329, there are not many other devices capable of matching that kind of latency. Also, the Cineeye 2S, at startup, uses automatic frequency selection to select the cleanest channel. It chooses from 20 available channels. Additionally, it streams the embedded audio, accepting 44.1KHz/48KHz 16bit/24bit inputs.

Transform your device into a professional monitor

By utilizing the free Accsoon Go app, you can turn practically any modern iOS or Android phone or tablet into a professional monitor. You have access to features like pinch to zoom, user-selectable LUTs, peaking, false color, waveform, histogram, and blue only display.

If you have custom LUTs or CDL, you have the option to load them to preview on the iOS or Android device screen. The app offers popular camera Log types previews as well.

The Cineeye 2S transmitter features an all-metal construction without a fan, which means the device runs completely silent. Also, its two antennas are foldable, making for easy transportation and storage. In total, the device mature to be 108mm×68.5mm×30mm and weighs 213g without a battery. The device’s battery life runs up to 14 hours of a single NP-F970 battery. The device also features a DC barrel connector with a wide-ranging input of 7.4-16.8V, opening up another powering option.

The Accsoon Cineeye 2S 5GHz transmitter is out now for $329. 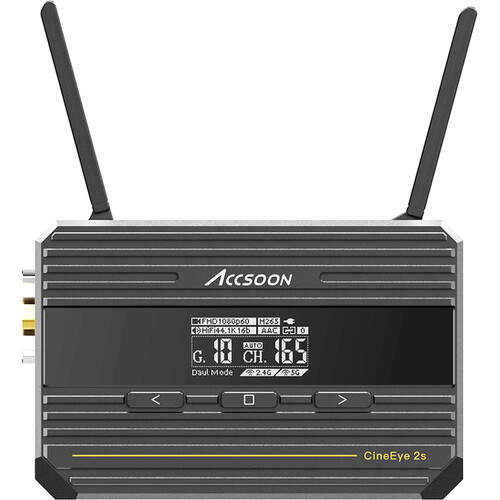