There are many impressive parts about the new V-Raptor 8K VV, but the one that stands out the most is its sensor. RED’s V-Raptor 8K VV houses a powerful multi-format 8K sensor — capable of shooting “large format” 8K or 6K in super-35. The point of shooting at such high resolutions is to capture as much detail as possible. That way the image has the highest possible quality when downscaling the video to 4K. Also, it gives productions more frame space to work with when cropping for a 4K project.

V-Raptor 8K VV: one of RED’s most impressive cameras

In addition to high resolutions, according to RED, the 8K VV delivers the fastest scan time of any of its cinema cameras. RED claims the V-Raptor 8K VV can scan twice as fast as previous RED cameras. RED also says the camera has the highest dynamic range of any RED camera, offering up to 17 stops of dynamic range.

The 8K VV features a Canon RF mount, but you can use PL and EF lenses if you attach a lens adapter. Additionally, you can choose to record in three different recording modes: REDCODE HQ with up to 360 MB/s, MQ mode at up to 300 MB/s and LQ mode — shooting at up to 180 MB/s.

You can get the RED V-Raptor 8K VV later in 2021 for $24,500. This price will likely be out of reach for most productions, but RED intends this camera to be for high-end productions and rental houses. Most of its specs are likely unnecessary for typical productions. 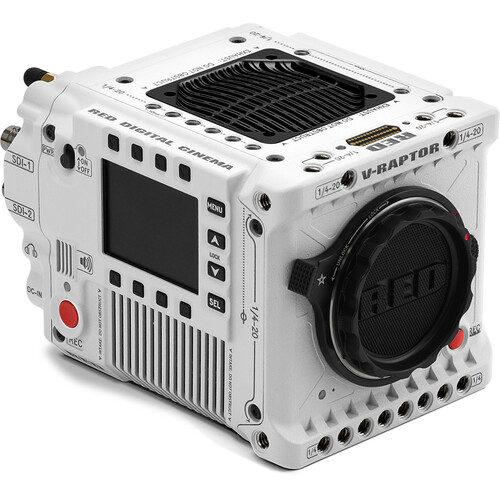