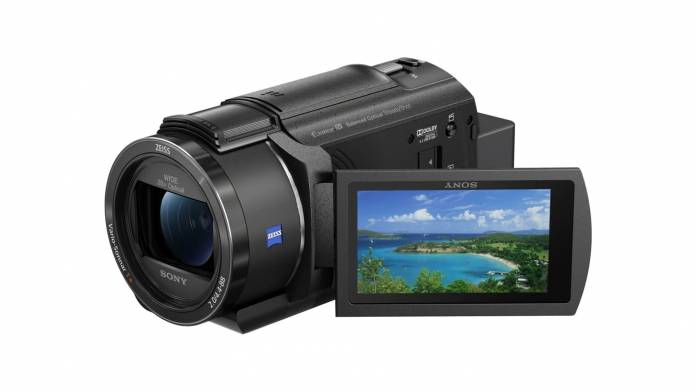 Sony recently announced a new 4K Handycam camcorder, the FDR-AX43/B. According to the company, the camcorder will offer comprehensive stabilization technology.

The FDR-AX43/B is the latest Handycam from Sony and looks to be a great camera for vloggers. It can shoot up to 4K and uses a built-in gimbal mechanism to keep things smooth when shooting. These features are what make the camera geared toward vloggers. It’s a portable camera that promises to keep things stabilized while the vlogger is walking or moving the camera around while talking into the camera.

The new camera features a ZEISS Vario-Sonnar T zoom lens with 20x optical zoom. Additionally, it features 30x Clear Image Zoom for 4K footage and 40x zoom for HD footage. Inside, the Handycam has a 1/2.5-type Exmor R CMOS sensor with BIONZ X image processor. This should make it work well in low light. Additionally, the camera features a 3” Flip-screen. The screen furthers its usefulness as a vlogging camera for vloggers.

The Sony FDR-AX43/B is not out yet. However, it will be out later this month for $850. There are a few things that the camera has going for it. It has an increased battery life and has an on-camera mic. However, there are DSLRs and Mirrorless cameras out there that you could get for a little more that boast the same features, if not more. Still, though this camera is built to be portable and doesn’t require the extra add-ons commonly found on mirrorless camera rigs.