The Alpha 1 houses a 50.1-megapixel full-frame image sensor alongside an upgraded BIONZ X image processing engine. After the update, you can expect eight times more processing power than its previous version. Together, the sensor and processing engine enables the camera to capture 8K 30p 10-bit 4:2:0 video.

“Alpha 1 breaks through all existing boundaries, setting a new bar for what creators can accomplish with a single camera. What excites us the most—more than the extensive product feature—is Alpha 1’s ability to capture that which has never been captured before,” Sony writes.

The SonyAlpha 1 offers 8K 30p 10-bit 4:2:0 XAVC HS recording with 8.6K oversampling, allowing for high-resolution, high-quality video capture. You can even use the 8K video you shoot for 4K editing. Shooting at such high resolutions allows for much more flexibility in post because more details are captured at higher resolutions. You can shoot 4K video as well at up to 12 frames per second. This allows you to shoot up to 5X slow-motion video. While also supporting 10-bit 4:2:2 recording, this feature can be used with efficient Long GOP inter-frame compression or high-quality Intra (All-I) intra-frame compression. As for the camera’s ISO, it comes with a ISO range of 100–32,000 (expandable to 50–102,400 for stills).

To keep the Alpha 1 cool when shooting 8K 30p video continuously, the system is made with a dissipating structure that keeps the image sensor and image processing engine temperatures in check.

For its color matrix, the Sony Alpha 1 features S-Cinetone. That’s the same color matrix that produces FX9 and FX6 color and skin tones. “It delivers natural mid-tones, plus soft colors and gorgeous highlights to meet a growing need for more expressive depth,” Sony says. The system’s S-Log3 gamma curve allows for up to 15+ stops of dynamic range. Its S-Gamut3 and S-Gamut3 Cine color gamut settings also make it easier to match up Alpha 1 footage with other footage shot on other cameras.

With the 50.1-megapixel image sensor and its larger buffer memory, the Alpha 1 can shoot up to 155 full-frame compressed RAW images (165 full-frame JPEG images at up to 30 frames per second). Additionally, according to Sony, the camera has calculation speed of up to 120 AF/AE per second and can automatically adjust exposure.

While this camera is a total powerhouse, the Sony Alpha 1 also features the world’s first viewfinder with a 240 fps refresh rate. The viewfinder does not black out when an exposure is made. It’s made with about 9.44 million-dot, and a 0.64 type Quad-XGA high-definition OLED display. Also, it offers 0.90x viewfinder magnification, a 41° diagonal FOV, and a 25mm-high eyepoint.

The Sony Alpha 1 features 759 phase-detection points in a high-density focal-plane phase-detection AF system covering approximately 92% of the image area. This should allow you to focus and stay focused in potentially difficult situations to do so on other systems. The camera’s Real-time Eye AF improves performance by 30% over the previous system, according to Sony. This is due to its integration of the BIONZ XR. Improvements also have been made to the Real-TIme Eye AF for humans and animals. Now the system can use Real-time Eye AF tracking with birds. This is the first time an Alpha series camera can do that. Lastly, the camera features AI-based Real-time Tracking that automatically maintains focus.

With high-speed readout, due to the image sensor, the system reduces rolling shutter by up to 1.5 times when shooting stills (compared to the Sony Alpha 9 II). Additionally, it offers anti-flicker continuous shooting with an electric shutter, the first time ever seen in the world. Also, for the first time in an Alpha camera, the electronic shutter flash sync up to 1/200 sec is supported.

The Sony Alpha is priced at $6,500 and will begin shipping in March. This camera is priced higher than the highest-end mirrorless cameras. However, you can justify its price with what the camera has to offer. It looks to potentially be one of the best mirrorless cameras ever developed, so it’s naturally going to be on the pricey side. We know we’re excited to get our hands on one. 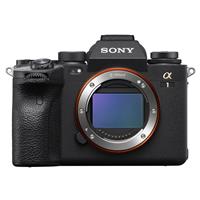