The SIGMA 18-50mm Contemporary lens has a constant wide aperture of F2.8 throughout the zoom range. This is ideal for video use as it means that the exposure doesn’t alter when you change focal lengths. The iris has 7 blades and closes down to F22. The maximum aperture is not as wide as with the prime lenses in the X Mount lineup. However, you will still be able to achieve a shallow depth of field, especially at 50 mm.

The SIGMA 18-50mm Contemporary lens is constructed with 13 elements in 10 groups. These also include one special low-dispersion lens and three aspherical lenses. The 18-50mm zoom range is equivalent to 27 mm to 75 mm on a full-frame camera.

The SIGMA 18-50mm Contemporary lens has a minimum focusing distance of 12.1cm and a maximum magnification of 1:2.8 at 18mm. The 18-50mm lens also supports AF-C (Continuous AF) and in-camera aberration correction on supported cameras. In addition, the control algorithm, including AF drive and communication speed optimization, has been developed specifically for X Mount interchangeable lenses.

The SIGMA 18-50mm Contemporary lens has a lightweight body, weighing only 10.1 ounces (285g). It’s also a compact lens, measuring only 3 inches (76.8 mm) in length. The filter size is 55 mm. In addition, the mount is rubber-sealed to cater for use in a variety of environments.

SIGMA lenses are renowned for their optical quality. The 18-50mm Contemporary lens is a great addition to the X Mount range alongside the three existing prime lenses. If you use an APS-C X Mount mirrorless camera, then you should consider taking the new lens for a test drive.

The SIGMA 18-50mm F2.8 DC DN Contemporary lens for FUJIFILM X Mount cameras is scheduled to be released in December at $549. 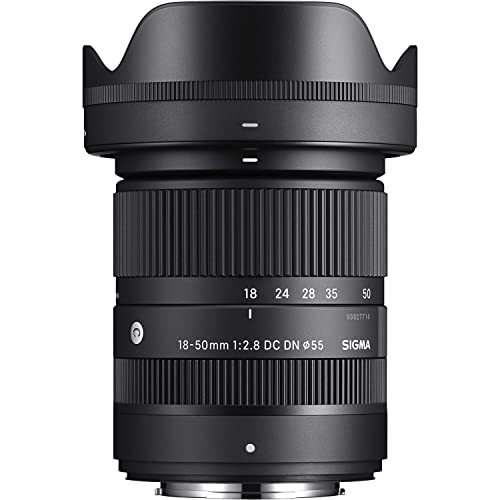