Read on to find out more about this new lens.

Samyang claims the AF 85mm F1.4 E II is the smallest and lightest large-aperture standard 85 mm lens for the Sony E-mount. The lens is 3.92 inches in length and weighs just under 18 ounces. It also has a weather-sealed design to protect it from light rain, snow and dust.

The Samyang AF 85mm F1.4 E II lens has 11 lens elements in eight groups. These include four HR (High Refractive) elements and one ED (Extra-Low Dispersion) element. The lens has a 28.9-degree angle of view for full-frame cameras and a 19.1-degree angle on APS-C cameras. The iris has nine blades and an aperture range from F1.4 to F16. In addition, the lens has a switch that allows you to adjust the aperture by rotating the focus ring.

The Samyang AF 85mm F1.4 E II lens is a lightweight and high-quality lens. With fast and accurate autofocus, this could be a great lens for run and gun or even gimbal shooting. The lens doesn’t have focus distance markings, but if that’s important for you, then Samyang’s manual 85 mm cine lens is a better — and cheaper — option. 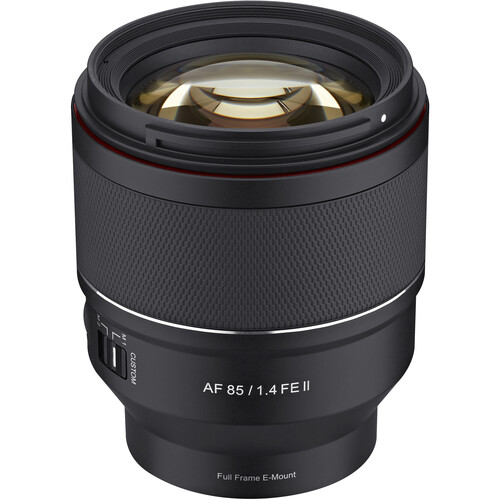