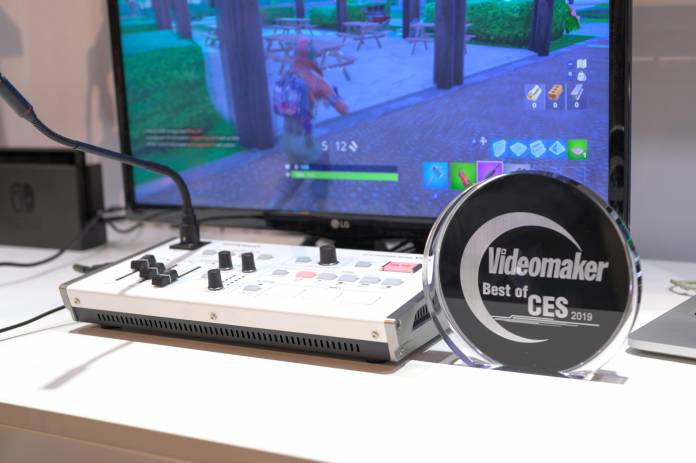 From what we saw at CES, this dynamic multicamera mixer can connect, switch and stream cameras, presentations and gameplay, as well as smartphones and tablets with HDMI inputs. The device offers “amazing picture quality and sound that outperforms video live streamed from just a mobile phone or static webcam,” according to Roland.

Each of the three inputs on the VR-1HD accepts HD and computer video resolutions, and it can also be used as an audio mixer with two studio-quality XLR microphone inputs and a line input.

The VR-1HD also allows users to go hands-free and headset-free while live streaming with a top-mounted mic input. This lets users use a gooseneck mic to operate the VR-1HD with dedicated controls. The mixer can switch cameras based on who is speaking into the microphone. If more than one person talks into a mic, or if everyone is silent, the VR-1HD can switch to a wide shot of the scene, capturing both speakers.

Additionally, the Scene Switching functionality allows users to instantly switch between scenes with transitions. The mixer can have five scenes preset.

Other functions include Auto Scan function, which gives users the ability to pre-set a specific time for switching between sources. Also, Beat Sync Switching listens to the tempo of a performance and automatically selects which camera inputs to switch between.

This mixer just needs to be plugged to a computer’s USB port for a fully produced live cast or recording. Those who stream on Twitch, YouTube or Facebook can all find use out of the VR-1HD.