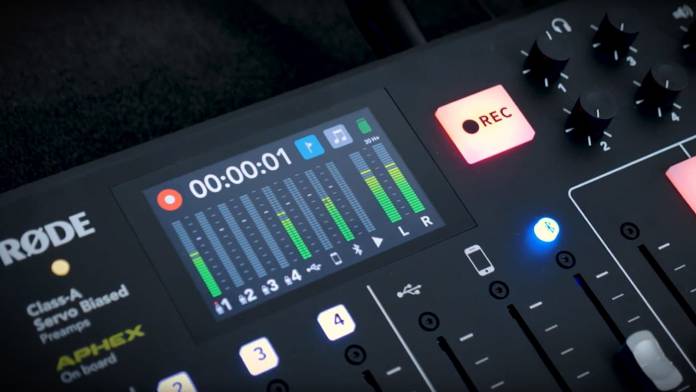 The new firmware update brings in over 25 powerful new features to the RØDECaster and the companion app. Let’s get into all the new features coming:

Now, users will have the ability to access podcasts stored on a microSD card directly from the unit without having to take the card out and put it into a computer. That’s all due to Podcast Transfer Mode.

This has been a hotly requested feature from many users, so it’s good to see it being added.

After downloading the firmware update, the RØDECaster Pro’s home screen will have a new sound pad playback indicator button. The icon indicates which sound pad is currently playing. Also, it shows you how much time that pad has before the sound ends.

It also acts as a shortcut to the sound pad configuration screen. The firmware update allows you to modify settings that could only be accessed in the companion app before. Those settings include color-coding the pads and setting the playback mode. Additionally, there’s a new playback mode called “Pause” that allows you to pause playback by pressing the pad. Finally, you can now store up to 8 banks of sounds — 64 in total.

With the RØDECaster Pro firmware update, you can now disable the main output level control knob. This bypasses the level control. There’s also now a button to automatically mute the monitor outputs when faders are open to prevent feedback when using monitors.

Other features include pre-fade listen mode and the ability to speak with callers on the USB, Smartphone and Bluetooth channels without the conversation being recorded or going to the monitor outputs.

One of the new features in the companion app is the ability to save and load ‘Shows’. What is a Show? A Show is a snapshot of your RØDECaster Pro settings, sounds, etc. Those can be saved onto your computer. These could come in handy when you run a couple of different podcasts. You can also load a Show to another RØDECaster Pro.

Factory sounds can now be restored via the app. Also, the app can now automatically sync the date and time between the RØDECaster and the host computer.

You can access the RØDECaster Pro firmware version 2.0 here.