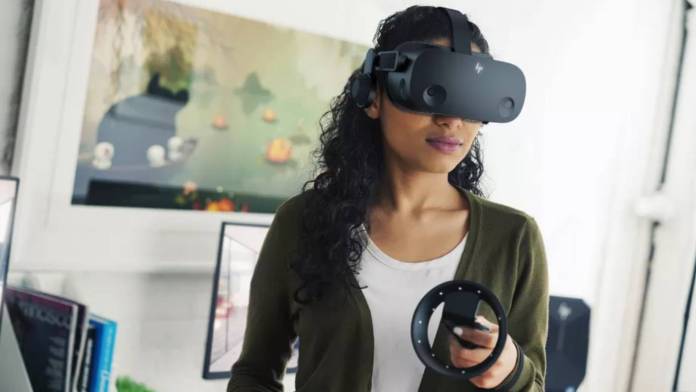 To start, the resolution of the Reverb is the same as the first-gen, but that isn’t necessarily a bad thing because its resolution was already a key feature. It offers 2160 x 2160 pixels per eye. That beats out even the high-end Valve Index. That has just 1440 x 1660 pixels per eye. Additionally, the Reverb G2’s field of view is the same. So what’s been changed? Well, HP is giving the Reverb G2 new lenses and panels. The previous model had an issue with cloudy visuals. They have said the new lenses and panels will solve these problems. HP has also improved the headset’s two front-facing cameras with a camera on each side. That’s an upgrade from the original’s standard Windows Mixed Reality tracking system. Also, the headset will now include Index’s off-ear speakers.

There are still a few features that haven’t been updated that could use some love. While the new G2 is using different lenses, its refresh rate is still at 90Hz. For comparison, Valve’s Index offers a 120Hz refresh rate. Also, back to the G2’s field of view, it’s still just 114 degrees compared to the Index’s 130 degrees.

One of the weaknesses with the original Reverb G2 was its controllers. Many have said that they were awkward to hold and were far from standard. The new controllers have gotten redesigned to be closer to the standard Oculus Touch design. This means HP has added two face buttons to each hand and removed the trackpad.

The Reverb G2 is open for pre-order now for $599 and said to be released later this year. While it isn’t the cheapest headset available, it does offer a lot that other VR headsets don’t. For instance, while the Rift S costs $399, it doesn’t include features like a manual slider to adjust the distance between the lenses. From the looks of it, the new Reverb G2 could prove to be an above-average headset that improves on what the original Reverb suffered from.