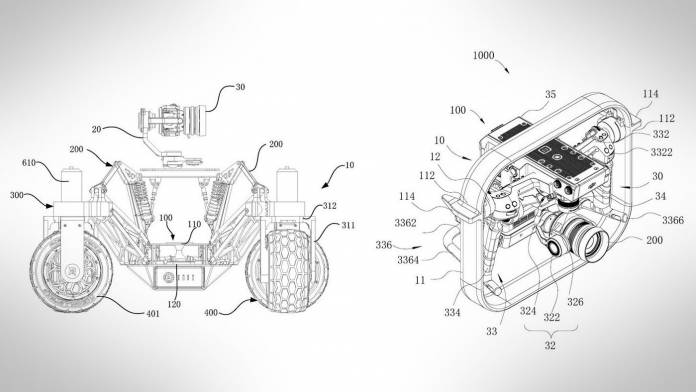 DJI is a juggernaut in the flight-based drone market. However, there’s news it seems that DJI is taking a step out of that space with new patent images.

A new DJI patent has been discovered

A new Chinese patent has been discovered by Weibo users “Machine Power” and other shows as well. The patent depicts a rugged, land-based machine. It is also holding a suspended, stabilized camera. It almost looks like a small-scale lunar rover with a camera attached to the top of it. Also, likely not surprising, it seems DJI is using its own camera and stabilizer for the vehicle. DJI uses its in-house cameras and stabilizers for the Mavic and its other drones, so it isn’t a shock it is using them for this ground-based drone.

One of the major benefits it seems is the vehicle’s ability to travel rough terrain smoothly. The camera is held by a stabilizer and should operate smoothly. It should be simple to operate and likely lightweight.

DJI’s new patent machine could be similar to Freefly’s ground-based Tero camera system. However, Freefly doesn’t used its own camera and stabilizer. Typically, the Freefly is used to support heavier cameras like the ones from RED with a stabilizer. However, the Tero is a very heavy vehicle. In contrast, DJI’s ground-based drone would likely be much more portable and user-friendly.

All-in-all, it seems like this is a sensible step for DJI. The vehicle would be able to capture ground shots that airborne drones have trouble with. Still, this is just a patent and the actual product may never materialize. This patent news just gives us insight into what DJI is currently researching.