The Panasonic LUMIX GH6 has a new 25.2-megapixel image sensor with an improved dynamic range of over 12 stops when shooting in V-Log. This increases to more than 13 stops when using the Dynamic Range Boost mode. The sensor can shoot video up to 5.7K resolution and 5.8K for anamorphic 4:3 video. Panasonic claims the sensor has a high-speed readout and less rolling shutter distortion.

With the Panasonic LUMIX GH6, you can record 4K 60P 4:2:2 10-bit H.264 video with an unlimited record time. At these settings, the camera can also output video over HDMI while recording internally. When you drop the resolution down to full HD, you can also record at up to 240 frames per second. In addition, for the first time on a LUMIX camera, you can record 5.7K ProRes and ProRes HQ internally at up to 30p.

Another LUMIX first with the Panasonic LUMIX GH6 is .cube LUT compatibility. Panasonic are making 35 conversion LUTs designed for their VariCam cinema cameras available free of charge for use in the GH6. The camera also has a pre-installed V-709 conversion 3D LUT for onsite previewing of your video.

The Panasonic LUMIX GH6 has a powerful range of video assist functions, including a waveform monitor, vectorscope and a luminance spot meter. You can also overlay safety zone markers on the display if needed when shooting for broadcast TV. In addition, the GH6 can detect when you are shooting vertical video and record this position information.

Panasonic has also improved its audio with the LUMIX GH6. You can record 48kHz 24-bit audio with the built-in mic and up to 96kHz 24-bit audio when using an external mic. The camera also has a headphone socket for monitoring your audio. In addition, you can record 4 channel audio when recording in ProRes and using the optional Panasonic DMW-XLR1 XLR Microphone Adaptor.

The Panasonic LUMIX GH6 has a 3,680k-dot OLED viewfinder. It also has a 3.0-inch 1,840k-dot touchscreen monitor, which Panasonic designed so that you can move it freely even with an HDMI and USB cable attached.

The Panasonic LUMIX GH6 has the same sized body as the Panasonic GH5. Unlike the GH5, the GH6 uses a forced cooling mechanism with a fan to allow unlimited recording. The camera also has a weatherproof, dust and splash-resistant construction. In addition, the magnesium alloy full diecast armor frame makes the body lightweight yet durable. The LUMIX GH6 has two memory card slots, one for CFexpress and the other for SD cards.

The flash synchro socket on the Panasonic LUMIC GH6 is also a timecode in and out socket. The camera comes with a BNC conversion cable for timecode. In addition, the camera has both Wi-Fi 5 GHz and Bluetooth v5.0 for you to transfer video from the camera to a smartphone.

Preorders for the Panasonic LUMIX GH6 will open this month. 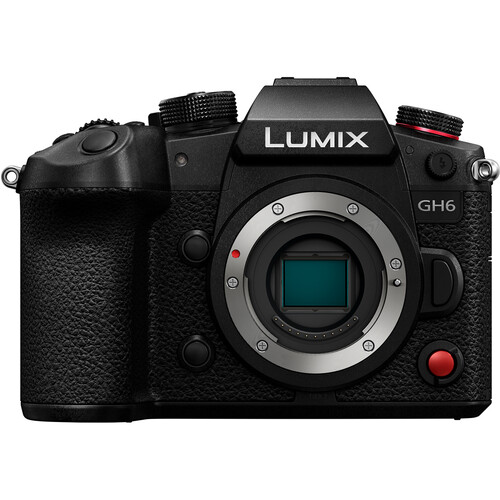