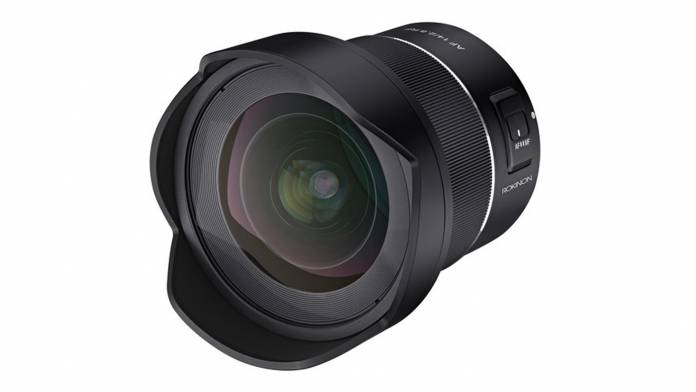 According to the press release, the lens has a 113.9-degree ultra-wide-angle view, which is said to be the widest for any autofocus prime lens made for the Canon R series mirrorless cameras. Additionally, Rokinon promises that the AF 14mm will offer “high performance, value, and affordability.”

Right now, Canon R series cameras are forced to use an EF/EFS with a costly mount adapter to be able to use an autofocusing ultra-wide-angle prime lens. Often times, all this becomes heavy for a mirrorless camera. The new Autofocus 14mm has a shorter length of the flange back to reduce its length and weight. The drop in size should allow for faster and quieter AF performance.

The AF Rokinon 14mm RF mount lens has a bright f2.8 aperture and a rounded seven-blade aperture. Inside, it has a 14 element / 10 group design. It uses UMI anti-reflective coatings and six special elements. These consist of 3 Aspherical, 1 High Refractive Index, and 2 Extra-low Dispersion elements.

The lens has a Manual / Autofocus switch along with dust and moisture resistant weather sealing. Additionally, it has a lens hood, high strength aluminum alloy housing, and a rear filter holder.

The AF Rokinon 14mm F2.8 Full Frame ultra-wide for Canon RF mount will be out in December. It will cost $799.