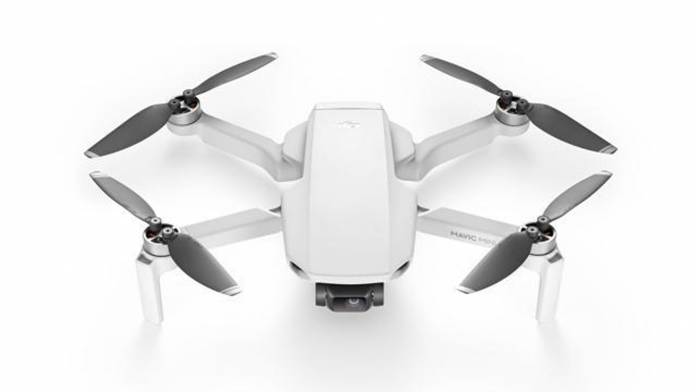 Prior to launch, Newegg’s Canadian store had given us the leaked images of the Mavic Mini. However, this wasn’t the first time we heard about the new drone. In fact, there had already been a ton of leaks. For instance, there was an FCC listing for the drone in August. Also, DroneDJ shared some images recently as well. Each leak has brought us more and more information, but now we finally have official details directly from DJI.

When it comes to video recording, the Mavic Mini sports a 2.7K camera mounted to a 3-axis gimbal. DJI claims the drone can stay in the air for up to 30 minutes, and it supports HD video transmission at up to 4 kilometers.

Paired with the included controller, the DJI Fly app offers simplified flight controls, video recording and editing. Additionally, the drone’s Vision Sensor and GPS Precise Hover feature promise to make this new drone safe and easy to fly. This new drone is also highly portable with a similar folding design to other drones in the Mavic line.

“To design a drone as lightweight, compact yet capable as Mavic Mini was one of the most challenging projects we’ve ever tackled at DJI,” said Roger Luo, President, DJI. “Distilling top-of-the-line features into a palm-of-your-hand drone is the culmination of years of work, and we are ecstatic to bring a new class of drone to the DJI lineup. Mavic Mini’s long flight time, ultra-light weight and high-quality camera makes it DJI’s everyday drone – and most importantly, it’s easy to fly, no matter your experience level with drones.”

Looking at the specs, the drone should appeal to beginner and pros alike — anyone looking for an easy way to capture smooth and cinematic aerial shots.

No need to register the drone with the FAA

The DJI Mavic Mini is available now. It’s priced at $399 for the basic package or $499 for the Fly More combo, which comes with extra batteries, propellers and other accessories including a carrying bag. For more information, head to dji.com.