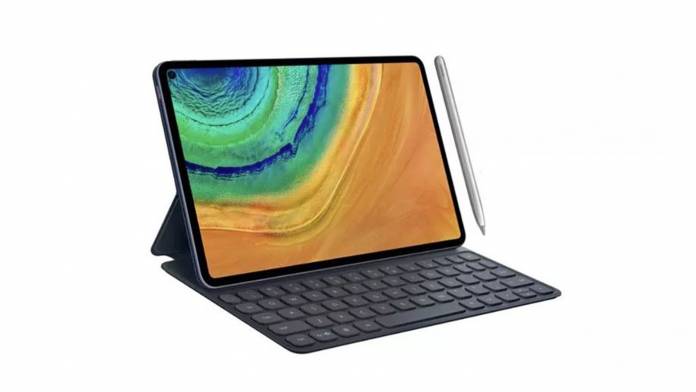 That’s not an iPad Pro. That’s Huawei’s newest, leaked tablet. There is a lot of similarity between the two. However, there is a big difference between their camera designs.

We are getting this leak from a post by 91Mobiles through Android Central. The post revealed renders of Huawei’s new tablet and it looks a lot like the iPad Pro. However, there are subtle differences between the two, so it isn’t an exact copy.

So let’s get into what the leak tells us:

Huawei tablet has a different camera

The big difference between the iPad Pro and this leaked tablet are their cameras. The Huawei tablet seems to have a dual-lens back camera and a hole punch display with a front-facing camera.

The leak also says the tablet has a magnetic keyboard case. Note though, the keyboard may or may not be sold with the tablet. We are not sure at the moment. There’s also a new stylus. It attaches to the top of the tablet. Likely, it attaches using magnets.

The leaked renders show the Huawei has made the bezels around the screen slimmer and has eliminated the fingerprint sensor. That means the in-display finger sensor could be used on the tablet itself.

91Mobiles says “we can expect” that the tablet will have “flagship-class specifications.” They suggest the laptop will have a Kirin 990 SoC processor, up to 8GB RAM, up to 256GB storage and “a large battery.”

There was another leak from Evan Blass. He suggests the name of the new tablet might even take the “Pro” from Apple. Blass says the tablet will be called Huawei MatePad Pro.

We will update you if more information comes out about this tablet.