Here’s a quick rundown of everything new with the updated FUJIFILM X-T30 II:

The FUJIFILM X-T30 II shares similar hardware with its predecessor. It houses a 26.1MP “X-Trans CMOS 4” sensor and an “X-Processor 4” image-processing engine. Together, this sensor and image processor enables autofocus up to 0.02 seconds, going toe-to-toe with the X-T4’s autofocus speeds. Additionally, phase detection pixels are placed across the entire sensor, resulting in practically 100 percent coverage across the sensor. This opens up more flexibility when using autofocus; the camera can better focus on subjects, even those not in the center of the frame.

Overall, the X-T30 II offers the same shooting resolutions as the X-T30. The camera shoots using data equivalent to 6K to generate 4K video to provide higher quality and less noise than standardly shot 4K video. However, Fujifilm has increased the camera’s frame rate cap to 240 frames per second for slow-mo video shooting.

Fujifilm says it has improved the X-T30 II’s autofocus system. This includes improved performance when tracking moving subjects. There have been improvements to the system’s performance in low light as well. Now, the camera can use autofocus in dark conditions at -7.0EV. It also retains Face / Eye autofocus functions to keep the subject’s face/eye in focus, even in portrait photography.

We wish the new camera went a little further to improve its autofocus system. For instance, we would have liked to see Fujifilm include in-body image stabilization. 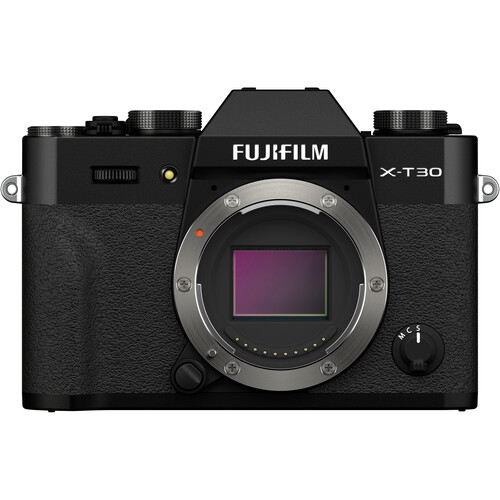