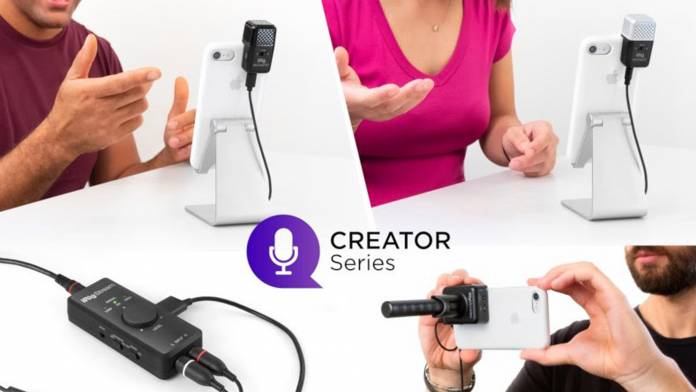 IK’s Creator Series is geared to help video content creators, YouTubers, live streamers and other social media broadcasters who use mobile to capture audio. Let’s look at each one and see what these new products are all about:

For YouTubers and live streamers, the iRig Mic Cast 2 can be mounted to iPads and smartphones. Its magnetic design allows it to snap onto the device even with a case. Also, it works in both portrait and landscape orientations, so you can shoot in whatever orientation you want to.

In terms of its versatility, the iRig Mic Cast 2 works with any app that records audio. So you can use whatever recording app you prefer. The mic’s capsule design also should allow you to select a front or rear pickup pattern to reject off-axis noise.

All of the core features of the iRig Mic Cast HD match the Cast 2, with a few enhancements. It has a gold-sputtered capsule, a 40 Hz to 20 kHz frequency response, and 24-bit, 96 kHz converters. It also offers front and rear selectable recording plus a bi-directional figure-8 pickup pattern.

You can adjust the mic’s sensitivity too. When monitoring, the Mic Cast HD offers a headphone out with selectable direct or processed sound and a multi-color LED for visual indication of the signal strength.

This shotgun microphone comes with a number of pro features and mounting options. It compatible with a wide range of devices, like smartphones, tablets and DSLR cameras. It includes the same magnetic mount as the Cast 2 and Cast HD, but it also includes a hot shoe adapter for mounting to DSLRs.

Its gold-sputtered condenser capsule offers a directional pickup that directly focuses on what is in front of the mic. That should eliminate any unwanted background noise. Additionally, its 24-bit, 96 kHz converters should keep things clear as well. When used with DSLR cameras, the mic offers a 10db pre-amplifier that boosts the signal before it gets to the camera. That will reduce any noise generated by the camera’s built-in audio circuits.

This device is a mobile audio interface that mixes multiple audio sources down to one track for recording or streaming in mono or stereo with the user’s device. Its headphone/microphone jack offers both direct monitoring and offers an “easy” way to add a voice-over to a stream, according to IK Multimedia. It also includes a set of gain indicators and gain control and 24-bit, 48 kHz A/D converters. There’s additionally a Stereo/Mono switch.

Every product is open for pre-order now. Here is the pricing breakdown: