Fujifilm has announced a new flagship model of their Instax range of instant cameras. The Fujifilm Instax Mini Evo is a hybrid instant camera that can take digital pictures and print instantly to film.

You can capture around 45 images with the camera’s internal memory. You can also add microSD and microSDHC memory cards, which allow you to store around 850 images per GB. In addition, the camera has a 3.0-inch TFT color LCD screen with approximately 460,000 dots for you to review your photos before you print them.

The Fujifilm Instax Mini Evo has a selection of built-in effects which you can use to boost the creativity of your photos. There are ten lens effects, including vignette, fisheye, light leak, color shift and double exposure. There are also ten film effects, including vivid, canvas, monochrome, sepia and retro. The lens and film effects can be used together to give one-hundred different combinations for your photos.

The Fujifilm Instax Mini Evo has a classic retro camera design, with black leather-style panels and silver trim. The styling even extends to the camera’s controls. In addition, you can turn the lens dial to select lens effects and use the film dial to switch film effects. To print your photos, you use a switch that works like a 35 mm camera’s film advance lever.

The Fujifilm Instax Mini Evo has been released in Japan and Australia but won’t reach the US until February 2022. You can expect the camera to have a $199 price tag. 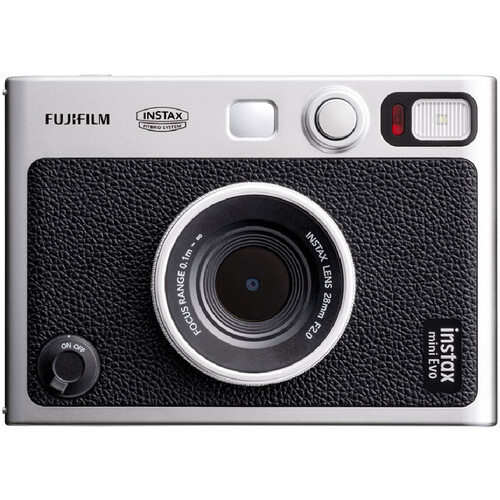