Announced alongside the new Fujifilm medium format mirrorless GFX100S, the X-E4 is the most compact camera ever developed for the X-Series.

The Fujifilm X-E4 has a “rangefinder-style” design, heavily influenced by classic film cameras. Its key highlights include fast autofocus and its ability to oversample 6K footage to capture 4K 30p 4:2:2 10-bit video, despite its compact design. Internally, the camera has the same e 26.1-megapixel, X-Trans CMOS 4 sensor seen in other X-series cameras. It also retains the 0.02-sec autofocus and color science found in X-series cameras.

According to Fujifilm, the X-E4 is fitted with its newest face and eye detection technology. This technology allows the camera to focus in low light as low as -7.0EV. However, that’s if the camera is equipped with the Fujinon XF50mmF1.0 R WR lens. Working in conjunction with the 26.1MP X-Trans CMOS sensor and the image processing engine X-Processor 4, Fujifilm promises the camera is capable of fast autofocusing. Its phase-detection autofocus points across almost 100% of the sensor in just 0.02 seconds. Also, the camera’s capable of tracking moving subjects with its AF-tracking algorithm.

X-E4 has a compact body

Overall, Fujifilm kept the design of the X-E4 simple. The most common and useful controls are placed on the camera’s front-side dials. Additionally, the camera weighs just 0.80, making it the most lightweight X-series camera to date. It measures out to be 4.77 inches x 2.87 inches x 1.28 inches. Its rear LCD screen is tiltable but doesn’t go too far out from the camera body. Fujifilm wanted to keep the overall design compact. 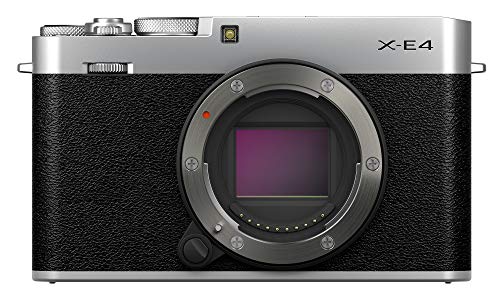 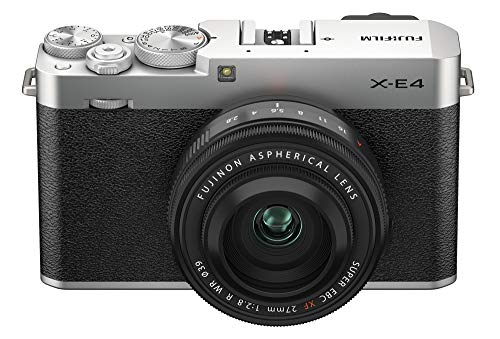