DJI’s latest drone, DJI FPV, is unique. Essentially, it borrows some of the best features in racing drones and standard, cinematic drones.

The FPV mixes the speed performance of racing drones with the cinematic features of a traditional drone. It’s a speedy, cinematic hybrid that’s unlike any other drone. The DJI FPV comes with goggles, allowing you to see a first-person live image as the drone flies. Additionally, the drone responds to either the single-hand controller or hand motions.

“DJI FPV creates a new drone category, and opens up new worlds of possibilities for content creators and drone fans from beginners to experts alike,” DJI writes. “Right out of the box, DJI FPV combines the best available technology for a hybrid drone like no other. It can fly like a racer, hover like a traditional drone, Ferdinand Wolf, Creative Director of DJI Europe, continued.

The DJI FPV shoots 4K video at 60 fps. In terms of stabilization, the drone implements RockSteady electronic image stabilization. Specifically, it eliminates the global shutter effect, which often comes up when shooting fast-moving scenes. The drone features a 120 Mbps camera mounted on a single-axis gimbal. The gimbal furthers stabilization and provides stability during flight maneuvers.

Additionally, the drone supports slow-motion capture. It slows the video down four times the normal speed, shooting in 1080p and 120 fps. The drone saves the footage in H.265 or H.264.

The DJI FPV’s speed maxes out at 140 kph (87 mph) and offers a max acceleration of 0-100 kph (0-62 mph) in just two seconds. Considering this drone shoots 4K video, those are incredibly fast speeds for a cinematic drone.

Luckily, it has a few safety features to ensure the drone doesn’t crash into anything mid-flight. Its safety features include, emergency brake, hover feature, and GPS-based navigation makes it friendly to beginning users.

The drone includes a visual observer to watch for airspace hazards. It seems the FPV’s speed and acceleration are a recipe for disaster, but it seems DJI designed it with safety in mind.

In total, it offers a 10km transmission range, auto-switching dual-frequencies, and a high bitrate of 50 Mbps.

In its Normal mode, the DJI FPV operates similarly to other DJI drones. It hovers in place with DJI’s GPS and visual positioning systems (VPS). This mode is the most user-friendly, as it allows for obstacle detection mid-flight with its front sensors.

This mode disables the front detection sensors and hovering. So users have more control over the drone. It’s for more experience pilots.

Sports Mode mixes the Normal and Manual Mode. It comes with some dynamic movement capabilities. It also includes some of the safety features in the Normal mode.

This mode allows more than one person to view the drone’s first-person feed. It is capable of sending the footage to eight extra goggles. 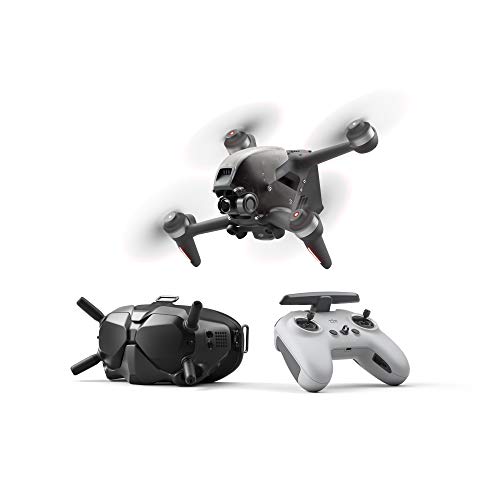