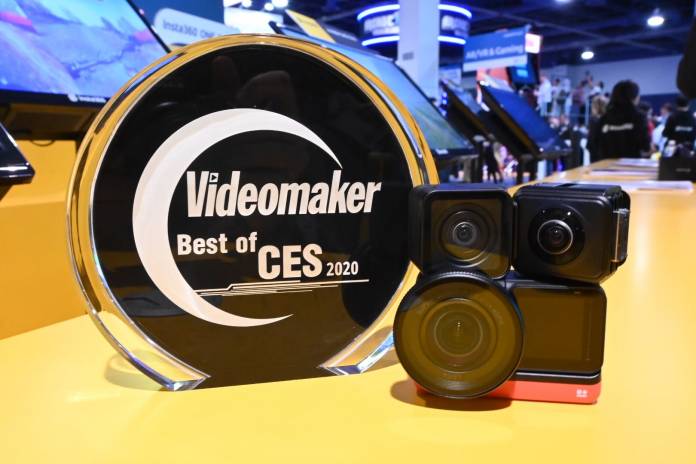 Breaking it down, the One R has a unique modular design like no other. You can choose to shoot 4K, 360-degree or with a one-inch sensor. At the same time, it is portable, being about the same size as a GoPro camera. It’s also one of the best performing action cameras on the market to date. We can proudly say the One R is CES 2020’s Best 360 camera.

The main idea behind the One R is you’re able to switch between a 360 camera mod or the camera’s two wide-angle camera mods, including the Leica 5.3K 1-inch sensor mod. This camera is driving the industry forward with this kind of swappable, modular design.

Breaking it down, the One R is made of three parts. Those parts are the camera, the body, and the battery base. The body is mountable in either direction and the original battery base fits in the bundled mounting bracket. It can also work up to 60 meters underwater.

Additionally, the camera is equipped with the second-gen of FlowState stabilization and has better low-light performance. That’s also more efficient with H.265 video encoding and improved HDR algorithm.

How is Insta360 One R’s video shooting?

The Insta360 One R offers different video shooting specs depending on the module you choose. If you go with the 4K Wide Angle Mod, you’ll be shooting 4K/60p video and 8x slo-mo at 1080p resolution. With the Dual-Lens 360 Mod, the camera shoots 5.7K video and uses FlowState stabilization. As for the 1-inch sensor mod, that will give you better overall image quality.

Now, Insta360 isn’t a drone company. However, there’s an “Aerial Edition” One R kit that will allow you to mount a two-part 360 camera mod at the top and bottom side of a drone. So essentially, you will be able to shoot 360 video with a drone with the One R.

Insta360 is offering three kirs for the One R:

The Aerial Edition is also out for $550. Currently, it is only compatible with the Mavic Pro and Mavic 2. To learn more, visit Insta360.com.