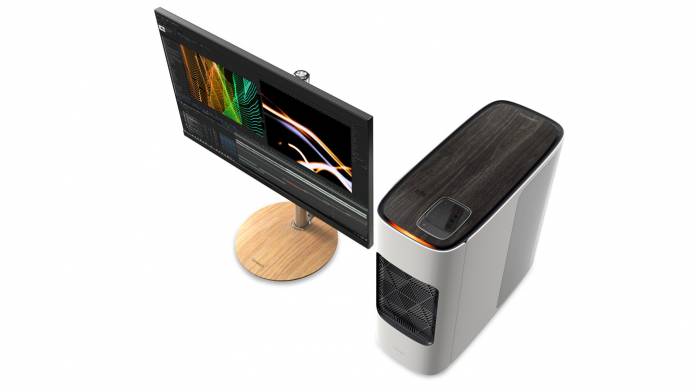 The ConceptD 700 uses an Intel Xeon E processor and up to NVIDIA Quadro RTX 4000 graphics. Acer says this combination will “address the needs of film makers, animators and AEC (architecture, engineering, construction) production designers” with “power and stable” performance. It’s geared towards those working in 3D computer-aided design and demanding content creation.

How powerful is the ConceptD 700? It’s capable of supporting up to four 8K displays with HDR support. “It’s a beautiful addition to any modern studio,” says Acer.

The ConceptD 700 is said to operate quietly. Acer says the workstation will operate at just 40 dBA. Furthermore, the workstation features a minimalist Scandinavian design-inspired aesthetic. It includes a white finish, woodgrain-inspired top side and rounded corners.

With all the heavy rendering the workstation is going to be doing, it needs to have an effective cooling system. The ConceptD 700 features three cooling fans that draw air in through the triangular-patterned front air panel and circulates it throughout the chassis.

The CPU, GPU and memory usage can be easily monitored through the intuitive ConceptD Palette. It features a health indicator that signal issues requiring troubleshooting. Additionally, it has a lock and an intrusion alarm in the event of theft and unauthorized access.