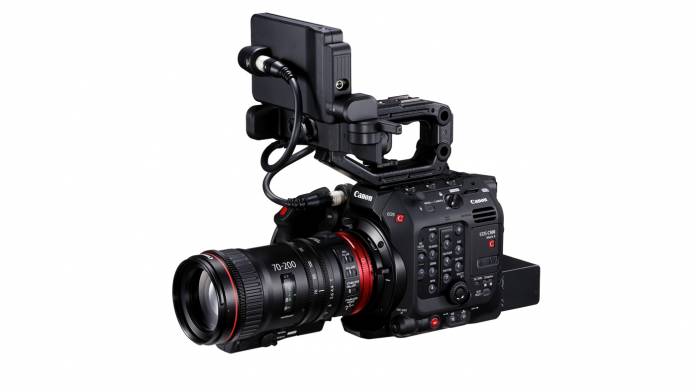 The Canon EOS C500 Mark II picks up where the EOS C500 left off. Canon believes the sequel’s better than the original. The specs suggest that might be true.

With its 5.9K full-frame sensor, the C500 Mark II shoots up to 5.9K at 60fps with 15 stops of dynamic range. Additionally, it can shoot up to 120fps in 2K. It has the new DIGIC DC 7 image processor that “allows for more fluid and efficient recording” of 4K and HDR, according to Canon.

Additionally, the camera features Cinema Raw Light. First introduced in the C200 with about one-third to one-fifth of a typical Cinema RAW file.

A first for a Canon camera, you can change the lens mount without needing a Canon service center. The EOS C500 Mark II can be bought with a standard EF mount and then have the option to buy either EF-lock or PL mounts and change it yourself.

Canon says the camera is “quite modular.” It features a 4.3-inch LCD monitor and a GR-V1 grip. Depending on your use, because you can build out the camera, the EVF-V70 electronic viewfinder, SU-15 shoulder support unit and EU-V1 and EU-V2 expansion units are all available to be purchased separately. The expansion units allow for gen-lock, sync out, remote use and ethernet connection, while EU-V2 expansion unit features all of those functions plus a V-mount battery connection, along with two analog XLR audio ports and a 24v DC Out.