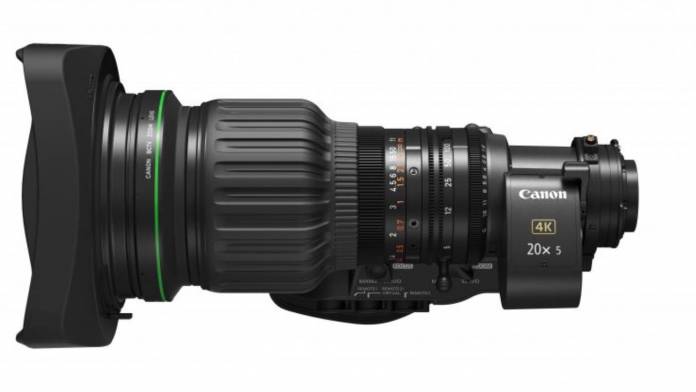 The CJ20ex5B features a focal range of 5.0-100mm (10-200mm with optical extender), which will work well for things like END, EFP and sports productions.

According to Canon, this lens is designed for broadcast cameras that have 2/3-inch sensors. It delivers 4K UHD image quality and features a built-in 2x extender that can expand the zoom range up to 200mm. Canon says the CJ20ex5B lens can achieve “high-level” 4K UHD performance across the entire zoom range because it incorporates UD and Super-UD lens elements and a fluorite coating. They ultimately help reduce chromatic aberration and minimize ghosting and flaring. Canon’s also reduced focusing fluctuation because it incorporated an improved inner focusing system.

One key aspect of the new CJ20ex5B zoom lens is its portability. In total, the lens weighs 4.76 lbs. Its form factor measures out to be 9.9 inches long.

Enhancements over the previous model

The CJ20ex5B lens also improves on a few operational controls over previous models. First, the power-on button now allows the value encoder to initialize at the same time as the lens is turned on. This allows users to operate the lens more quickly. Also, the lens has an onboard display and is compatible with the Canon G-Series zoom and focus controllers.