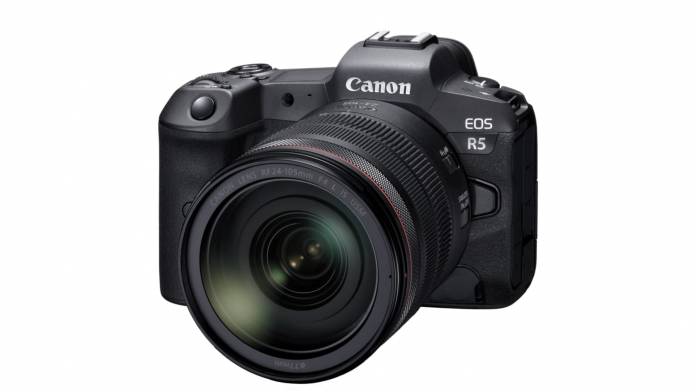 The EOS R5 will record internal 8K video up to 29.97 with the full width of the image sensor and will feature Canon’s Dual Pixel CMOS AF tech in of all its 8K modes. Additionally, the camera will leverage the EOS-1D X Mark III’s autofocus technology to implement “Animal Detection” auto focus.

“The AF technology will help users steadily track animals such as dogs, cats and birds by detecting the body, face, or eye of the subject, helping to ensure fast and accurate capture of quick-moving objects,” says Canon.

The EOS R5 will have a newly designed CMOS sensor and a new image processor. In addition to the camera, Canon is planning to release seven RF lenses and two RF lens extenders that are also currently in development.

“The EOS R System was initially developed to provide engineers with the ability to design lenses that were thought to be impossible to create previously,” admitted Canon in the announcement. “The wide lens mount diameter, shorter back focus, and high-speed system for transmitting data between camera and lens have resulted in an imaging system that delivers higher image quality and greater ease-of-use than ever before.”

The new CMOS sensor in the EOS R5 will, according to Canon, allow for continuous shooting up to about 20 fps while using the silent shutter and up to about 12 fps with the mechanical shutter. This will make the camera very useful for professional sports and wildlife photographers.

The EOS R5 will be the first Canon camera to be equipped with In Body Image Stabilization. In addition, it can be used with in-lens stabilization, which Canon said will bring “light levels not previously imagined”

When will the camera come out?

All we know currently is the EOS R5 is currently under development. We will update you once we get more information about the camera.