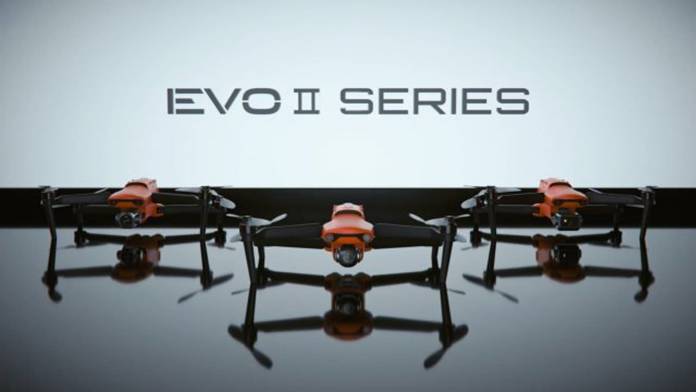 The drone market could be in for a shakeup. At CES 2020 this year, Autel announced three new drones: the EVO II and the EVO II Pro and EVO II Dual.

For a few years, now DJI has essentially monopolized the drone marketplace. No other drone company has been able to significantly challenge the drone juggernaut. The new EVO II drones might be able to give DJI a run for its money, or at the very least hint at a future competitor for DJI.

Each drone is built with the same body; however, they each have different cameras. All three of the drones have a range of up to 5.5 miles, in addition to built-in 8GB of internal storage and a controller with a screen.

The EVO II’s camera can shoot 48-megapixel photos and, notably, 8K video. This would make this the first drone to shoot 8K video and also be the first consumer-grade 8K camera. Breaking that down even more, Autel Robotics says the drone shoots native 10-bit 8K at 24 or 25 fps shot on a Sony IMX586 sensor.

Additionally, the camera has a wide f/1.8 fixed aperture, but while it may be better for recording at night, it has a small 0.5-inch sensor. So, there might be a notable amount of noise. The lens does add a full stop and a third of light than what is usual.

As for battery life, the drone can last up to 40 minutes of flight time. The DJI Mavic 2 lasts up to 31 minutes. It also includes its 12 obstacle-avoidance sensors to avoid obstacles.

It appears the Pro version is geared more towards getting the best footage you can. Now, this version of the drone shoots 6K video. That may not make sense because the EVO II shoots 8K video. However, the Pro version has a full 1-inch Sony IM383 sensor with an adjustable aperture from f/1.8 up to f/11. So in other words, it offers the ability to adjust the depth of field. It doesn’t take 48-megapixel stills, though. Instead, it shoots 20MP images.

The Dual version features a FLIR Boson thermal camera with the 8K camera. It can record simultaneously at a low resolution in thermal mode.

The drones are not out yet. They’re currently in production, but Autel Robotics expects the EVO II drones to begin shipping in a matter of weeks. Pricing hasn’t been officially announced yet, but the company says we can expect the EVO II to cost about $1,495 and the Pro version to cost around $1,895.