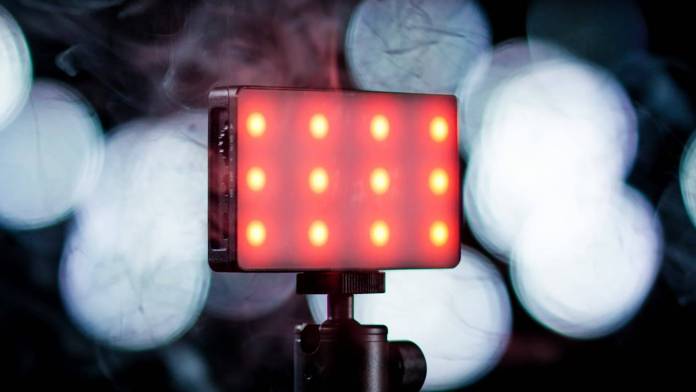 Aputure has just announced its first-ever RGBWW film light: the Aputure MC. According to Aputure the little light can emit any color at any time.

This light offers full HSI color control and a CCT range of 3200K-6500K. This should give you a lot of options when it comes to the range of colors you can go with. Additionally, the light looks both portable and lightweight. It’s about the size of a credit card, so you can imagine how easy it would be to carry around.

The MC is the first light from Aperture to include Hue, Saturation, and Intensity color control. It comes with 360-degrees of hue and 100 levels of saturation adjustment. So basically, you can get any color with a device that can fit right in your hand.

What about the quality of its color? The MC has a CRI and TLCI scores of 96+ and SSI score of 84 tungsten and 74 in daylight. Those are good scores to have for a light. Additionally, this comes with RGBWW: a technology that, according to Aputure, “reproduces color better and more accurately.” It allows the Aputure MC to add two additional white LEDs and not rely so much on Red, Green, and Blue LEDs.

The Aputure MC has a few lighting modes. In addition to HSI Color Mode, the MC allows you to adjust your white light with CCT Mode. You can also use built-in lighting effects with its FX Mode.

As we wrote earlier, the Aputure MC seems to be highly portable. While just the size of a credit card, it weighs 130g. Additionally, it’s just 12mm thick. It really does seem like you can bring the light anywhere. Also, it also has built-in magnets and a 1-4”-20 screw mount.

Aputure says the Aputure MC is the first RGBWW light to be compatible with the Sidus Link mobile app. The Sidus Mesh system that’s built into the MC, should allow each light to communicate with each other and with the mobile app at the same time. You will be able to control lights within a 400-meter range without needing an external router as long as there are lights at most 80 meters between each other.

You can learn more about the Aputure MC on Aputure’s site.