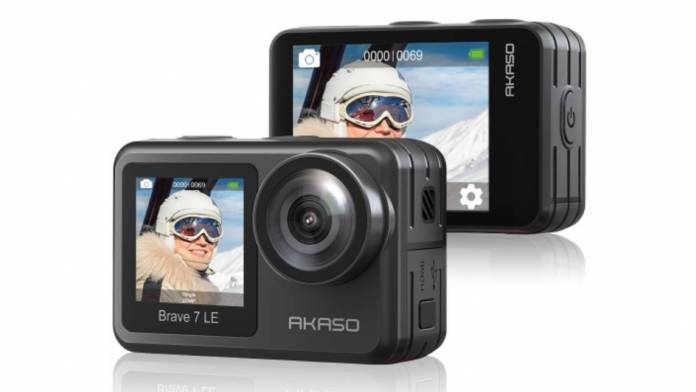 Usually, when you think of action cameras, you think of GoPro. Though the company had quite a lot of trouble making a profit in recent times, it remains one of the most recognizable action camera brands. However, there are many alternatives to GoPro and the AKASO Brave 7 LE Action Camera is one of them.

Open for pre-order right now, the AKASO Brave 7 LE is an action camera capable of shooting 4k video at 30 fps and 20 mp photos. When you compare that to the HERO7, their video shooting resolutions and frame rates are identical. Both cameras shoot 4k 30 fps video. Plus they both are capable of shooting 180p 60 fps video. As for still images, the Brave 7 LE beats the HERO7, shooting 20 MP while the GoPro shoots just 12 MP.

The Brave 7 LE Action camera features a dual-color screen. According to AKASO, users can “easily” take selfies and vlog. You will be able to see your frame on both the back of the camera as well as the front. So you can see what you’re recording at all times. The back touch screen measures out to be 2.0” and is “clear and vivid” according to AKASO.

Moving on, the camera is designed with 6-axis stabilization. The “powerful 6-axis gyroscope design can correct vibrations when you are moving fast,” said AKASO. Additionally, the company said its stabilization system should make it much steadier and smooth than other 4-axis EIS cameras.

Action cameras need to durable since they’re going to be exposed to the elements often. The Brave 7 LE is IPX7 water-resistance, allowing you to record in many different weather conditions. A 98 FT (30 M) waterproof case is included, allowing you to use the camera for water sports like swimming, surging, and diving.

Wi-Fi is supported on the Brave 7 LE, enabling it to share videos and photos wirelessly through its app. The app is offered for both iOS and Andriod. Additionally, it features a built-in HDMI port, allowing you to directly connect the camera to a television.

More about the built-in Wi-Fi, it enables 2.4GHz Wi-Fi supported remote control. You can control the camera from a distance