Roland, known for its V-series line of multichannel HD video switching products, has revealed a new streaming video switcher: the V-160HD. It’s a big release for Roland because it’s the company’s first switcher to have built-in streaming capabilities. It also offers many features tailored to hybrid productions. Let’s take a look at what it has to offer:

The Roland V-160HD connects to popular streaming platforms, like YouTube and Facebook Live, in full HD at 30/60 frames per second with HDMI and SDI I/O. Additionally, it’s able to stream to multiple platforms simultaneously. It looks suited for streamers or businesses wanting to reach their various audiences on different platforms. It also offers an eight-layer video effects engine, a 40-channel digital audio mixer, and integrated PTZ camera control (up to 16 at a time) — allowing you to add variety and finetune your stream.

Eight HDMI sources and eight SDI sources can be mixed in full HD, even if there are mismatched frame rates and color spaces. Four of the HDMI inputs feature built-in scalers for interfacing with devices like computers, smartphones, gaming consoles and legacy 4:3 devices. There are seven outputs in total (three HDMI, three SDI, and one USB-C).

Roland claims the V-160HD is compact and easy to use

According to Roland, the V-160HD is highly portable and easy to use right out of the box. It shouldn’t take you long to learn how to use the hardware, especially if you have experience using other switchers.

There are advanced workflow tools

One of the primary reasons the V-160HD is so accessible is its workflow options and tools. A single operator can do multiple functions with a single button press. With 30 preset memories and the switcher’s effects engine, it can change scenes while synchronizing the transition of all composition layers at the program output. The 100 macros also enable you to conduct more complex actions, such as switching and adjusting audio mixing, with a single touch.

The V-160HD features a new sequencer function, allowing you to record 1000 steps in the sequencer. Each step can include both presents and macros. After setting the cues in the sequence list, you can trigger them in order during your broadcast.

Roland claims you can achieve studio-grade sound and audio using the V-160HD thanks to its 40-channel digital audio mixer. You can blend signals from 16 inputs and USB-C with microphones and line-level devices connected to two balanced XLR combo and stereo RCA inputs. You can also stream music or other sounds from your phone or tablet through Bluetooth. 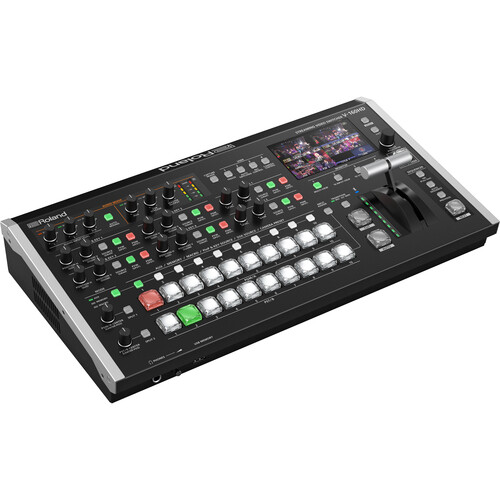