Rock the Music World with your Own Music Video. 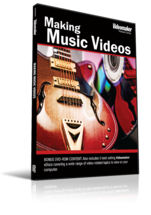 You can create a hit video with Videomaker‘s “Making Music Videos.” Find the right concept and your video will appeal to audiences and show off the music to its best ability. But that’s only the first step. You’ll also need to understand the nuts and bolts of putting the video together, how to direct musicians, how to edit for music and even how to protect yourself from industry sharks with an ironclad contract. Whether you’re having fun with your garage band or seriously pursuing a recording gig, “Making Music Videos” has all the info you’ll need to create music videos that rock.You can’t get away from it, every song needs a music video these days. The music video is the best way to grab listeners’ attention and bring any song to a larger audience. If you’ve ever wanted to walk down the street and overhear people listening to your music on their headphones, then you need to understand this vital tool to pump up any song’s popularity. The very earliest music videos often featured simple stage performances by the band, but it wasn’t until the advent of MTV in the early 80s that music videos really came into their own. From the very first video shown, the Buggles’ “Video Killed the Radio Star,” it was obvious that music videos were going to be huge. Today, you can’t make a hit without a video.

Videomaker‘s “Making Music Videos” guides you through the complete process from start to finish, so you can understand everything that goes into making a great music video:

Even a totally kickin’ song won’t go far without a snazzy music video. You can be the one to create that video. Whether you’re trying to promote your own music or working on commission for another artist, you’ll find everything you need to make the music video of your dreams in Videomaker‘s latest DVD offering.