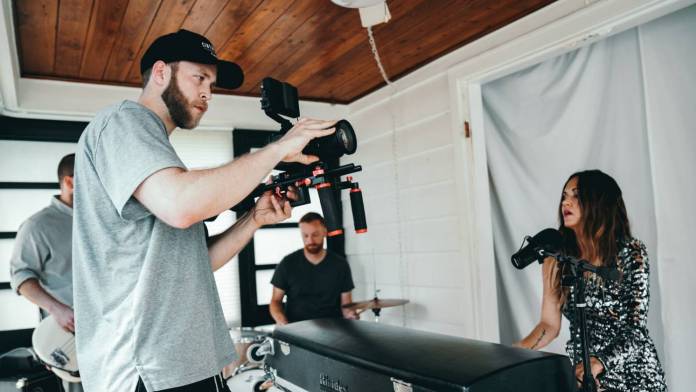 Huge video productions often create their own sets on sound stages set up perfectly to film from any angle. However, most filmmakers don’t have the ability to build their own sets. They are stuck with what shooting locations they have. This is where a major problem can arise: shooting space.

When you’re forced to shoot in a tight space, it’s a huge struggle to fit your cast, crew, camera, lights, and any other essentials. It’s a hard situation to be in, but there are a few tips you can implement that will make shooting in a tight space much easier.

Use a full-frame camera

Since you don’t have much—if any— space to shoot, you need to maximize the potential of the space you do have. One of the first steps you can take to do that is to use a full-frame camera. Cameras and their paired gear take up a lot of space. However, depending on the camera’s crop, you might need to have the camera closer to the subject, shortening the space between the camera and the actor and ultimately lowering the illusion of depth. By using a full-frame camera, you’ll be able to maximize your frame coverage. Additionally, you won’t have to crowd your actor to get the shot you need.

Shoot with a wide-angle lens

If you want to make the space you’re shooting in look bigger than it is, then shooting with a wide-angle lens. The way the wide-angle lenses work, in the simplest explanation, they expand space through a wider field of view. They give shots the illusion of deeper space then there actually is. So the wider your lens is, the more illusion of extra space there will be, as opposed to a telephoto lens that compresses space.

Now, there may be some instances where you want the scene’s environment to look small and tight. In this case, you would want to use a lens that retains the tightness of the environment and doesn’t expand the space. Thankfully when shooting with a full-frame camera, your lens options are fairly open.

Maximize the space you have

When you pressed for space, every inch counts in video production. Bring only the essential gear to the shoot. You don’t need to bring every piece of gear you own if you’re only going to use half of it. You may worry that you’ll end up leaving something you’ll need on set, but that’s where planning your shots comes into play. If you have a clear script and a shot list, you will know what you need even before you start packing. Bring only what you know what you’ll need, not what you might need.

It’s possible you can’t scout your shooting location beforehand, so it’s hard to plan what to bring when you don’t even know where you’re shooting. In this case, move all the essential out of the room. Don’t keep your unnecessary gear on set. Gear becomes a space liability when it isn’t needed. We also recommend to move out any gear that was essential at the beginning of the shoot but is no longer needed as the shoot progresses. Your setup and gear must be all easy to move because you’ll likely be moving things constantly to make more space where it’s needed.

Also, be sure to move out any extra furniture pieces or items that aren’t needed in the scene as well. Just like your gear, if a table or a sofa is in the way of your camera, move it out of the room. Plan your shots so you know what items are needed at what time. That way if you only have one scene including the table, you can shoot the scene first, then move it out of the room for the rest of the shoot.

The standard video production lighting setups might not be possible in cramped spaces, so you have to get a little creative. Lighting equipment takes up a lot of room. Standard lights usually have large lamps with wide stands that likely won’t be fitting in any small hotel. There are however other lighting options you can consider. First, there’s a lot of mini LED lights that can fit in smaller spaces and still give your scene a cinematic-style. You can also go more natural and choose to use natural light. When you are at location, take a quick look at all the available light and see if you can use a bounce board to bounce any extra light into your scene.

If you want to increase the space in your scene, shoot with a higher F-stop number. This doesn’t apply if you want to have the scene look cramped. Essentially, the higher the F-stop number the deeper the depth of field your shot will have. Depth of field is a term used to describe how much of the image is in focus. So, if you shoot with a higher F-stop number, your background will be in focus along with your foreground. When the background more in focus, the viewer will have to switch the focus between the foreground and the background, causing their brains to believe there’s depth.

If you still can’t fit your gear into the shooting area, find creative solutions

Even if your fully decked out camera can’t fit into your apartment’s bedroom, you can still find ways to still shoot the scene. For instance, you can shoot through your bedroom window. You can also choose to build your own small set. This option might be a little harder to do and cost more, but you’ll have more control over the layout of the set’s space.

Trying to shoot a video production in a small space can present a lot of challenges. The important thing to know is that you, your crew, and your gear all have to be flexible to the little space you have to work with.