The rule of odds is a compelling and often subconscious technique in film. It is a rule that applies to everyone, from the writer to the cinematographer to the director. So what is the rule of odds, what does it mean and how can you use it in your videos?

Rule of odds: The basic concept

A rule for everyone

A common mistake about the rule of odds is that this is a concept just for cinematographers. This is far from the truth. Staging and blocking are paramount to achieving the rule of odds. The arrangement of subjects in regards to where they appear on screen as well as why they appear there is largely the director’s job. However, when considering the rule of odds in film production, it is easily a job for many. For example, the writer contributes in ways, such as indicating in the script how many friends the main character has. When watching movies, have you noticed that school bullies always tend to have two cronies? Often, the production designer is in on the action as well. Are the lead and his friends going to be wearing distinctive clothing that always separates them from everyone else, allowing them to stand out even when they are in a crowd? Will the main character sit on the edge of a sofa that clearly could hold two other people, thus emphasizing their loneliness or isolation? Finally, cinematographers not only frame shots but also can advise and influence the director regarding staging.

The classic group of three: learning from a masterpiece

In Akira Kursawa’s “Throne of Blood” (1957), the Spirit of Spider’s Web meets two samurai, Washizu Taketoki and Miki Yoshiaki. In the scene, the Spirit sits at the center of the screen. The two samurai stand apart in the doorway, staring into the building at the Spirit. By staging the Spirit in the center and in the light, our eyes are drawn to her, unable to look away. This staging masterfully creates a triangle-like effect, which is considered by many to be the most desired compositional blocking.

A rule that demands staging

Staging for the rule of odds is varied and sometimes complex. As the number of subjects in a shot grows beyond three, it is easy to lose focus of your main subject(s). Understanding how to prevent this by using the rule of odds is important, so let’s look at some conceptual methods that can help.

This method is textbook Hollywood and has been used in everything from “Mean Girls” (2004) to “Star Wars” (1977). Three characters are pictured on the right-hand side of the screen, usually with one standing just in front of the other two. Our main subject on the left is alone. The space in the middle acts as a divider, splitting the subjects into two odd groups.

When you have six subjects, visually, you will tend to sort them into three groups of subjects — three-two-one or in three pairs of two. Brains will use visual cues such as depth, color and placement on the screen to form groups. When we see two people standing next to each other or in contact with one another, our brain often visually combines them to — subconsciously — seem like a single subject. In “The Avengers” (2012), the three-group method is used extremely well during the New York battle sequence, where the Avengers are finally fully assembled.

This method is similar to one-and-three. It makes six subjects into uneven, opposed numbers of five subjects and one subject.

This works well when you have situations where you can split six people up evenly into two groups.

When you exceed eight subjects on screen, our brains begin to cluster people together automatically. This can have unintentional effects if it is not properly staged. When dealing with large groups, it’s important to keep key characters closer to the center of the screen. For a great example on how to make large numbers work, watch the hit musical, “Grease” (1978). In the film, they effectively use staging, framing and wardrobe to establish and maintain the individual groups.

Odd thirds – space as a subject

This method features any number of characters on the left or right side of the screen and leaves the center and opposite side empty.

Odds and thirds and Orson Welles

A famous example of the combined effect of the rule of odds and the rule of third is the table shots from “Citizen Kane” (1941). Two people sit on either side of a table, and the space between them keeps getting larger as time goes by. In this case, the distance between the two subjects communicates the amount of unspoken things that separate and divide them. This is a very good example of using space not just as a rule but as a way to drive the story.

A rule that makes sense

Decisions regarding the rule of odds should not be made just to follow the principle. It is more important to have story and character-driven reasons for your choices rather than a nod to what may seem like an arbitrary rule.

The rule of odds: live

When covering live events, the most important thing is getting the shot. However, you should always aim for the best framing. For example, when shooting a panel of presenters at a conference, you may want to frame the person speaking and include the two panelists next to them. The shot will be more interesting even if the presenter is not. When shooting weddings, both video and still photography, try to use grouping methods to keep those odds. This includes that classic shot of the bride and groom in front of the officiant.

The next time you watch a movie, pay attention to the way subjects are organized and placed in a shot. Remember that subjects are not limited to just people. How well does the creative team use the rule of odds? You can also examine your own prior work. In situations where you used the rule of odds, were your shots more interesting and effective? While you may have been subconsciously using the rule of odds all along, hopefully, this new awareness will make you a more effective writer, director and/or cinematographer. 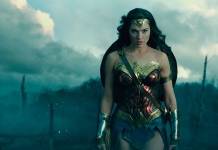