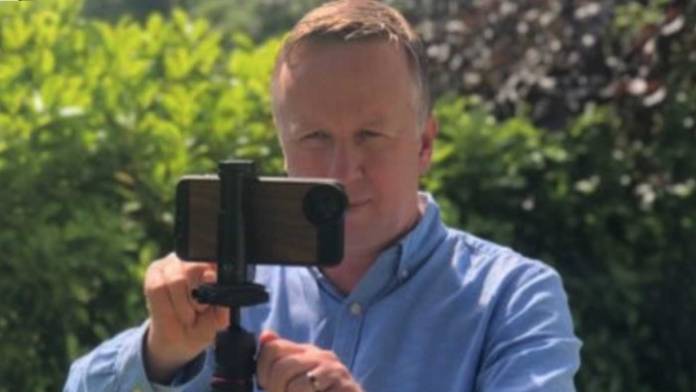 “It’s not about replacing existing ways of working. It’s about complementing them using the gear that we already have,” says Philip Bromwell. Bromwell is a journalist with Ireland’s National radio and television network RTÉ. He is a unique blend of reporter, shooter and editor. Bromwell got his start at the BBC more than 20 years ago. Now, he is a strong advocate for mobile journalism.

Over the past few years, Bromwell has traveled the world, covering everything from the Olympics to the Oscars. He knows the secrets of traveling with light, small, portable gear. Today he often works with his “MoJo kit”, as he calls it, or Mobile Journalism Kit. The kit contains a Manfrotto B3 tripod, a Sennheiser wireless lavalier and a few packable mini LED lights. The centerpiece — and most expensive piece — is his iPhone. This serves as a camera, and often an editing system when he’s in a rush.

Bromwell’s official title is Digital Native Video Editor. He tells us that shooting on the iPhone started as something of an experiment about five years ago. “I had a bit of extra time to do these [feature] stories but I was intrigued to use this camera that we carry with all the time. I was just trying to see what I could do with it. So, I started filming stories on my iPhone and nobody really noticed the difference.”

Bromwell points out that, for him, it’s not about the gear. “I don’t like to overburden myself with kits.” In his words– he “always comes back to the idea that my prime motivation is to tell the story.” So, Bromwell doesn’t “need loads of gear to do that. It seems counterintuitive.”

Bromwell started shooting on the iPhone 4s. The quality, compared to the network’s more expensive cameras, was more than acceptable. He stepped up to the iPhone 8 Plus about a year ago, which shoots in 4K. He tells us, because the network primarily shoots on HD cameras, “In effect, my phone now has greater capabilities, in terms of resolution, than the bigger cameras.”

To shoot, he uses the Filmic Pro app available for iOS and Android. It adds tons of control. “We’ve done news content on it,” he tells us. “Every genre of content Filmic can lay a claim to, in terms of people using their app to film stuff.” That includes documentary and feature film.

In terms of post-production workflow, RTÉ uses Avid editors. Bromwell, however, often edits on the mobile app, LumaFusion, which he calls transformative. “It is, in effect, the desktop editing experience but on your phone. Before it came along, editing options were very limited.”

In fact, sometimes, Bromwell edits directly on his phone. More often, he’ll return to the newsroom and airdrop his footage to an iPad Pro with the same editor. “I can use that much larger screen to do a fairly sophisticated edit.” He tells us that it’s great for keys and finesse edits.

One reason RTÉ has added these mobile production tools, Bromwell says, is because of the changes in the broadcast landscape: “Any broadcaster is facing similar challenges about how do we bring our content to parts of the audience who are no longer watching us on television? As a storyteller and as a journalist, first and foremost, I was intrigued by the idea of — How do I change my storytelling experience to bring my stories to different platforms.”

The mobile tools are perfect for getting the story and delivering it on multiple platforms: “I may do a TV version, I may do a square or vertical version for social media. I may have to do a version for the web site or our app, which may have subtitles. So, you may end up doing 3-4 different versions of the same story.” The entire workflow is created on the device that the audience will be watching on.

The entire workflow is created on the device that the audience will be watching on.

Of course, it also makes economic sense, “With the best will in the world you’re not going to be able to equip everyone in the newsroom with a video camera. Budgets aren’t going to allow it and you’re not going to get a return on that. Most of the people in your newsroom have phones. If they have a phone, they already have a really good camera. They also have, if you consider the app ecosystem, effectively a mini production suite in their pocket.” Bromwell is an advocate for training everyone to use the tools they have. RTÉ now has four mobile journalists.

Get the small story

Another big advantage of using mobile journalism tools is getting you into small spaces, to tell small stories. Bromwell says, “I’m a big advocate of the idea of trying to find what are ostensibly small stories, but they have a big impact.” In Europe, there is a lot of controversy surrounding the surge of refugees. “The media has been guilty of looking at refugees or asylum seekers as a homogenous group. I like to look at who is one person who is the individual and try to tell their story,” Bromwell explains.

For one story, he discovered a teenage girl from Syria with an incredible story. “She had only been in Ireland for 6 months she was already speaking really good English (with a very definite Irish accent) and she had taught herself to play the piano really well by watching YouTube videos.”

To go into this refugee camp with a large crew and tons of equipment may have had the wrong impact. “That girl had no preconceptions as to how her story should be told. The fact that I wanted to film her story on my phone made what could have been a potentially intimidating or different experience so much better.” Bromwell points out that mobile journalism might just be the perfect way to shoot in some situations.

The tools you have

Using the tools and the knowledge you have is the key beginning in mobile journalism. Bromwell says in the beginning, “I was applying everything I knew about filming an applying it to the iPhone camera. I was using all of my experience, all my understanding of things like composition and framing and technique etc. I was just treating my phone as another camera.”

As he did more work in mobile journalism, he had to learn new techniques. For instance, he found that you can’t really do an effective zoom. “You are the zoom,” he points out. But it is definitely possible to tell a great story with the camera you carry with you.

“This is not about making everybody work like this. It’s about creating a genuine mixed company of workflows, abilities and skills, and using the tools that we have available to us,” Bromwell says. “Its just proven, thus far, to be a pretty efficient and creative solution to solving a problem that we had that was how do we try to reinvent ourselves, reinvent our storytelling for a 21st century audience.”

You can follow Philip Bromwell and see his work on RTÉ’s web site. Check his Vimeo page to see more work created with mobile tools.