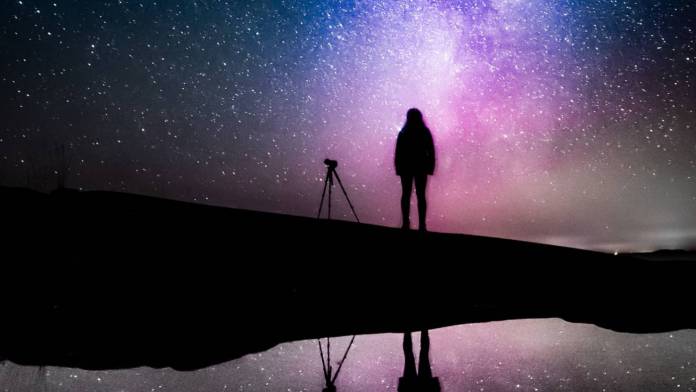 Let’s start with defining what we mean by astrophotography and time-lapses.

Astrophotography is defined as the use of videography and photography to capture astronomical objects, celestial events and areas of the night sky. Essentially, it’s the images and videos you take of objects—stars, moons, asteroids, etc.—and events—eclipses, meteor showers, comets—in space.

Astrophotography was first used in the science community. It was specifically used by scientists and ultimately revolutionized the field of astronomy research. However, today, astrophotography has branched out into the public. Now, many videographers and photographers use astrophotography to practice amateur astronomy. This practice is less concerned with capturing scientific data and is more focused on capturing something that’s aesthetically pleasing.

What is a time-lapse?

Now, let’s talk about time-lapses. Time-lapse videography is the technique where the frequency film’s frame rate is more spread out than the frequency used to view the sequence. The result creates an effect in which it appears that time moves faster. So, say you shot a scene at 1 frame per second. You then playback that scene at 30 frames per second. This will cause the scene to appear 30 times faster. This allows videographers to show the passage of time in the video in just a few minutes. Also, they’re used to capture processes that would usually appear slow to the human eye. For instance, time-lapses are used to capture the change in light over the course of a single day and the ocean’s tide rising.

What you need to know before shooting an astrophotography timelapse

Ultimately, the settings you set on your camera depends on what you’re planning to shoot. For starters, set your camera’s ISO to either 2000, 3200 or 6400. If your camera isn’t capable of those ISO settings, using an ISO 800 or 1600 is acceptable. However, the quality of the time-lapse won’t be as clear as it would be with the higher ISO settings. Additionally, shoot at least 250 photos per sequence. This allows you to capture 10 seconds of video footage at 25 frames per second.

One of the hardest aspects of setting up an astrophotography timelapse is focusing correctly. When you’re focusing the camera, focus it on a very bright star with its autofocus on. If your camera doesn’t have autofocus or you’d rather focus manually, turn on the camera’s live view and zoom in 10x with the magnify button. From there you can manually focus the lens on the stars. Once you feel you’ve focused on the scene, take a few sample pictures to ensure everything is sharp.

Also, be sure to check on your camera throughout the shoot. You don’t necessarily have to check everything. Just make sure that the camera is still recording. Be sure to bring an external battery source to ensure the camera will stay on the entire time. You will likely be shooting for hours, so don’t rely on your camera’s internal battery. You don’t want it shutting off in the middle of a shoot.

What kind of lens should you use?

The type of lens you use in astrophotography timelapse always needs to have a wide aperture. When you shoot with a wide aperture lens, your camera is able to receive more light than it would if you were using a more closed aperture lens. You want to shoot at the largest aperture possible so your camera can capture the most amount of light it can. A 34mm is a good aperture range for these kinds of projects. Additionally, you need to have a lens that’s fast. Look for a lens that is f/2.8 or faster.

What you need to consider when scouting for a location

While you will be shooting at night, it’s best to scout for your shooting location during the day. It will be a lot easier for you to find a safe, stable place for your camera. Now, setting up your shot before the sun sets makes it harder to get your composition the way you want it to be. However, there are smartphone apps out there that can simulate the night sky, helping you plan your composition ahead of time.

When you’re initially looking for potential shooting spots, you should look for areas that have the least amount of artificial light. Take a look at satellite images so you can get a general sense of where there is the most light in what area. You can also use the Blue Marble Navigator tool. This tool overlays satellite images of all the lights on Earth and places it over a map of the world from Google Earth. Use it to scout areas around you. However, keep in mind that it’s best used to get a general idea of where light is. You will want to look at other maps to plan the specifics.

Additionally, plan your shoot at the end of the month when there’s no moon. The moon brightens the night sky, so it will mess with your exposure. Shoot when there’s just a small waning moon or no moon at all.

Check before you begin shooting

Before you hit record, always double-check your setup and all your gears’ settings. You have to set most of your camera’s settings manually, so there are a few opportunities for human error. Check your camera, its focus and exposure. Also, if you’re using something like a slider, you want to make sure that you don’t have the slider on lock. It’s better to be safe than waste hours of shooting.

Create your own astrophotography time-lapse

Astrophotography time-lapses are a spectacular form of videography. It is capable of recording what’s invisible to the human eye. Let’s recap the steps you need to take to record a successful one. You need gear capable of shooting astrophotography time-lapses. The camera you use needs to have the ability to shoot at a high ISO and can focus on the night sky correctly. As for lenses, you want to use a lens that’s fast and capable of opening its aperture to 24mm. Also, be sure to bring an external battery and a steady tripod to ensure the camera stays in place when it’s recording.

When it comes down to it, good astrophotography time-lapses take capable gear, careful planning and patience. Be ready to wait a few hours for the shoot to finish. So, if you have the gear and the time, get out there and start shooting.