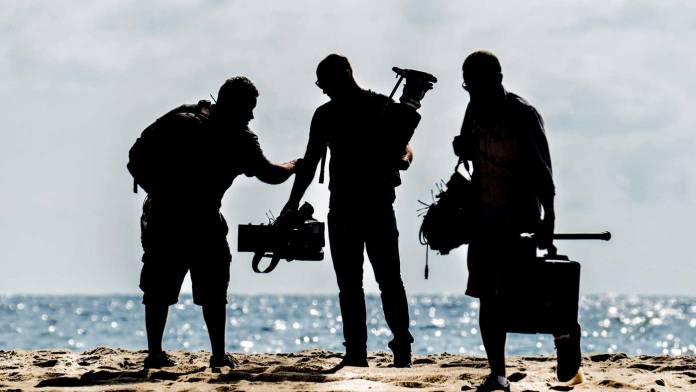 Orson Welles often had great ideas for movies and then spent years going from studio to studio in Hollywood trying to get someone interested, trying to raise money, and trying to get a script. When you’re dealing with huge amounts of cash in moviemaking, there is no single point of contact — everything is done by committee (For more on this, read Keith Aiken’s four-part blog post for scifijapan.com on the difficulties in getting Godzilla to the screen starting in the mid 1990’s.)

But if you don’t have money and you don’t have Hollywood connections but you do have a good idea, what are your options? Well, the era of the short film is back. Once relegated to film festivals and late night public television, brilliant short films have found an audience on platforms like Youtube and Vimeo.

Filmmakers Anthony Melton and Ben Franklin have made a splash over the past decade in a genre where short films have exploded — horror. Together they formed Bloody Cuts, a UK film project dedicated to making spooky shorts. A lot of their productions have everything you’d expect from a major studio release with the exception of an expensive cast and a two-hour runtime. “We’ve been lucky,” they say, “to have met a host of very talented creative artists along the way and we’ve built a fabulous crew largely based on trust and a shared passion for filmmaking over the years.”

Today, we’re going to look at a number of short films — some classic and expensive, some poorly produced and influential, but all with something to teach us about filmmaking.

Georges Melies: A Trip to the Moon

A monumental moment in early filmmaking history — French director Georges Melies spent an enormous amount of money making an approximately 15 minute (since the film was hand cranked, the speed varied by who was turning it) movie sendup of Jules Verne’s “From the Earth to the Moon” — a cannon fires a rocket to the moon, carrying six scientists who explore the unknown, fight monsters, see amazing sights, and pretty much do exactly what we’re doing when we play virtual reality video games today — speculate about what it would be like to visit space.

See it because: Melies made a hundred movies, this is the only one you need to see to win points at your local pub trivia game. The production values are, no pun intended, through the roof. These people were inventing moviemaking and were incredibly ambitious, talented, and, ultimately, successful.

Claude Lelouche is a directing titan from France. His 1976 classic C’était un rendez-vous is a single POV shot eight-minute breakneck race through Paris at 5:30 in the morning – with no regard to red lights or anybody’s safety as a driver races to a date to meet a woman on Montmartre. Watching it you’ll wonder that nobody was killed. Claude claims that he placed only one person on the course to warn the driver if pedestrians were in the street. He also claims that he made it up to 200mph while filming, but nit-pickers on the Internet have carefully measured the distances between objects and intersections and shown that he was never going faster than 70 mph, which is still disturbingly fast on city streets.

See it because: By watching this short you will always be able to have a conversation with people wearing black berets and smoking Gauloises at the parties.

MTV was at the height of its popularity when the King of Pop dropped his best selling album, Thriller, which not only dominated the pop charts, it forever changed music videos. Jackson hired famed horror filmmaker John Landis to direct a 13-minute short film of the title track, an homage to horror films which features werewolves, classic cars and dancing zombies.

Watch it because: It’s important to realize that you can blow up the envelope and push past what everybody’s thought of as “good,” and that sometimes it requires getting someone from outside your field to mix what they do with what you do.

Along with her fifth studio album, Beyonce released a 65-minute series of short films that are among the most ambitious and successful bits of filmmaking in recent history. She teamed up with some of the best people in Hollywood. One of the videos, “Formation” directed by Melina Matsoukas, won the Grammy award for video of the year. Matsoukas needed to find some room on the mantelpiece as she’d previously won a Grammy for Rhianna’s “We Found Love.”

Watch because: No discussion of modern short films could skip over this groundbreaking work.

The Birch has some A-level effects in it, but it’s also a very well crafted story. When asked about it, Melton & Franklin agree that telling a good tale is paramount. “It’s story first, then technology. Most people have a fairly decent camera sat in their pocket so there’s honestly nothing stopping people these days. Technology has democratized indie filmmaking, meaning that it’s easier to capture and distribute on very small or no budget.”

Watch it because: Storytelling is at the center of any successful production.

In 1988, at the age of 15, Sadie Benning was given a $200 Fisher Price Pixelvision video camera. The cameras were only made for a year and recorded both audio and video on audio cassette tapes. Benning sat in her room and made a series of wildly influential short films about growing up gay and isolated. With nothing but teenage angst and a burning need to tell a story, Sadie Benning created simple films using dolls, handwritten notes and things in her room that got her quickly recognized by the art world and launched a career that’s involved grants from nearly every major arts organizations. You can find collections of her work on the Internet.

Watch her work because: Sadie Benning had nothing but perspective

When a short is not just a short

Lots of short films are what is called proof of concept it’s a way of saying “here’s my idea, here’s how I can do it.” Back before video got so good and so inexpensive, directors would pitch ideas from storyboards but now, with a small amount of seed money and an eager talent pool, directors can show rather than tell. But that doesn’t mean that a short film is always hoping to be remade as a longer one. Frequently a movie with a good concept fails when the filmmakers try and drag the concept into something that fills two hours. Since we’re no longer dependent on television with its predictable chapter structure and rote commercial breaks, consider making your next film as long as it needs to be rather than as long as it’s supposed to be.

Frequently a movie with a good concept fails when the filmmakers try and drag the concept into something that fills two hours.

This one captivated me when I first saw it — the idea is a mysterious vigilante is flying above the streets of Los Angels, 24 hours a day, occasionally murdering people by picking them up and dropping them back to the ground from a great height. Is he a hero? Or a villain? Who knows — but we might soon find out. With 11 million views on YouTube, his idea was picked up for development by Sony/Columbia. In the meantime, this a great short scifi film.

In 1993 The Wrong Trousers, a stop-motion claymation movie about a man and his dog (Wallace and Gromit) thrust itself into the spotlight with its clever writing, hilarious antics, and loveable characters. Though its running time of thirty minutes puts it on the long end of short film, it did win the Academy Award that year for Best Animated Short Film.

See it because: it’s one of the funniest and most endearing movies ever made.

This is a 2014 proof of concept science fiction film by Michael Chance about some allied soldiers who come across a German lab and discover an armored super-soldier suit.

See it because: Project Arbiter has great camera movement and Hollywood quality filmmaking, plus a better plot than a lot of high budget movies.

In 2015 I got to host the Kickstarter Film Festival in Philadelphia where movies made with money raised through the crowdfunding site were screened. One of the movies they showed was this amazing short sci-fi film by Frances Bodomo.

The cinematography was beautiful and the story was gripping. Watching it reminded me of my really early days of filmmaking when you’d show up at someone’s house and sit on the floor and screen two dozen shorts and you’d discover things that seemed secret, and people who were geniuses and sitting on those floors, being a part of that community, I really felt like a filmmaker. In 2015 Alfred P. Sloan foundation gave Bodomo $100,000 to make a feature of Afronauts.

See it because: it will inspire you to make art, not just film.

You’ve got everything you need to make a short film right now. You’ve got a camera — even if it’s the one on your phone — and if that’s what you’re going to use, have a look at this videomaker article on editing for mobile devices — and you’ve got the internet, which contains not only these terrific examples of filmmaking but also lots of stories in the public domain if you can’t think of an idea. How about making a short from a story by Edgar Allan Poe? Or Zora Neale Hurston? Check out Project Gutenberg for more inspiration.

The world is your oyster. When you finish your short, please share it with us on the Videomaker forums.