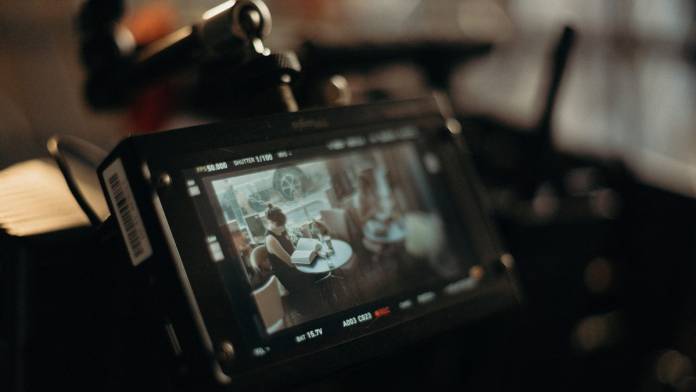 Let’s look at the key terms and concepts of cinematography. This topic is quite dense and could easily fill up an entire book. The list below comprises the basics to wrap your head around some important terminology.

Cinematography is the language of motion pictures. One of the most important tools at a filmmaker’s disposal is camera movement. There are countless ways to move the camera and exponentially more reasons to do so, but we’ll stick with the technical rather than the creative. Let’s look at the most common ones.

Pan: the action of moving the camera left-to-right or right-to-left on the horizontal axis, or the x-axis.

Tilt: the camera angles up or down on the vertical axis, or the y-axis.

Track: the camera moves through a space either forward or backward with relation to the subject. We also call this “pushing in” or “pulling out.”

Truck: the camera moves side-to-side while perpendicular to the subject.

Boom or pedestal: the camera moves up or down along the vertical axis to adjust the viewer’s eye-level to the subject. The term boom applies to when a camera sits on a dolly at the end of a hydraulic arm. Pedestal comes from the studio world where operators had to adjust to match a subject’s height.

Roll: the camera rolls on its axis clockwise or counterclockwise.

Zoom: the camera doesn’t technically move, but the resulting image has motion. The lens creates movement by changing focal length. Zoom shots were a staple of 1970s cinema. Just think of a character walking down the sidewalk and as the camera zooms out, we reveal two people following them.

Lenses do much of the work

Focal length refers to the distance between the point where light converges inside the lens—the focal point—and the image plane—the sensor or film negative. Usually displayed in millimeters (mm), it is measured when a lens is set to infinity. Simply put, the focal length indicates the degree of magnification. A low number represents a wide field of view, while a higher number designates a narrow angle of view. To get close to a subject, you may want to use a long lens, also called telephoto. Wide lenses tend to be used for capturing landscapes or establishing locations. With that said, nothing stops you from using a wide lens to get a close-up and a long lens to get a wide shot. It all depends on the context, environment and creative intent.

Field of view—or angle of view—is a degree value that indicates how much of the space in front of the lens is seen on the screen. A small or narrow-angle is associated with long or telephoto lenses, while a high number represents a wide field of view.

How many times have you heard a client or collaborator tell you they want a cinematic look for their project? Depth of field is a key component of cinematography and an important creative tool. It directly correlates with the focal length of a lens, but it also has to do with the lens aperture.

Depth of field—aka DOF—is a measure of how much of the space along the z-axis—or depth—is in focus. We typically hear of shallow DOF when talking about cinema. This broadly means that everything before or beyond where the focus is set to be out of focus. This is a technique used to isolate the subject and guide the viewer’s eye. On the opposite end, when everything in the frame is in focus, we call it deep focus.

Aperture—or iris—refers to the opening that allows light to travel through the lens and to expose the image plane. A set of blades make the hole larger or smaller. This opening has a number called T-stop on cinema lenses and f-stop on photography lenses. It refers to a measure of the amount of light passing through the lens. As a rule of thumb, the lower numbers represent more light coming in, and conversely, the higher numbers mean less light is allowed through.

Taking the above into practice, if we “open up,” it means we’ll have more light coming through and a shallower depth of field. If we “close down,” less light will be allowed through the lens and the focus will be deeper.

The aperture affects exposure, which is the result of light hitting the sensor or film negative. This is why we talk about stops when calculating lighting ratios. A stop equals double or half the amount of light coming through the lens.

At its core, cinematography relies on one thing: the frame. It is traditionally rectangular and of different sizes, which are labeled with numbers such as 1.78, 2.39, 1.33, etc. They represent fractions which refer to the ratio between the horizontal and vertical sides of the frame. The higher the number and the wider the frame will appear. For example, 2.39:1 means that the horizontal side is 2.39 times longer than the vertical one. This specific ratio is also known as “cinemascope” or “anamorphic,” but it does NOT mean the lens used was necessarily anamorphic.

As we learned from Greek etymology, writing is an integral part of cinematography, so it’s no surprise that the action of framing a scene is referred to as composition. In other words, it is the action of pointing the camera in a direction and angle to frame a scene. Think of grabbing an empty painting or photo frame and holding it up in front of you. What you see framed is the result of your composition. Of course, more thought, technique and creativity will undoubtedly go into composing a shot to tell your story. Camera angles are another key element in composing a shot.

A camera angle is an angle at which the camera is positioned relative to the subject. We don’t usually use numbers and degrees unless carrying out specific applications such as visual effects or scientific research, for example. The following are the more common camera angles.

Eye-level: the camera is set at a height at which we—the audience—would normally see the world.

High-angle: the camera sits higher than eye-level. This could be anything from setting a camera on an 8-foot ladder to the top of a building looking across the Hudson River.

Low-angle: the camera is lower than eye-level. It could be chest level or all the way down to the ground. Orson Welles pushed this concept in Citizen Kane with such low angles that they had to dig holes in the ground to place the camera.

Bird’s-eye-view: the camera is overhead looking straight down at the subject. Think of the classic shot of someone laying in bed or an aerial shot of city streets.

Wrapping it all up

Cinematography is the most important part of creating a film, or even a commercial. Cinematography is how the story is told. Through motion, angles, frames and more, a film transforms into a compelling story.