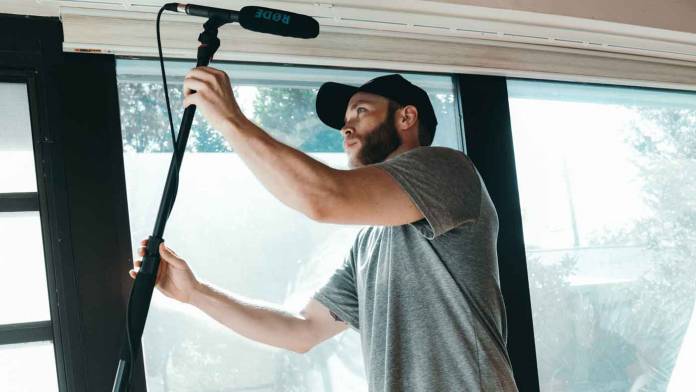 Though REAPER and Audition are extraordinary audio editors, nothing can fix bad audio production. Good sound design paints a portrait of your film’s world and bad sound design subtracts from that. Noisey or distorted audio is a primary culprit when it comes to ruined audio clips. Here’s what you can do to prevent distortion and noise in your audio recording.

Use the proper equipment

You’ll typically choose between two methods of audio capture in most types of production: lavaliers or a shotgun mic mounted on a boom pole. You want to make sure your mic is sensitive, but not too sensitive. Your shotgun mic, ideally, will capture anywhere from 80-140Hz.

There are three parts to a boom-mounted shotgun microphone setup. First is the pole itself, which your boom operator will use to support the mic.

If the microphone is improperly supported by a flimsy boom pole, it will be harder to manage. This often leads to noise from the operator making adjustments. Plus, it’s more likely to sneak into your shot.

Next up is the shock mount, which holds the mic in place. A good shock mount is vital to keeping the microphone from falling through your shot, even in the most extreme of situations. It can also prevent excessive handling noise from coming through on the recording.

Without headphones, it would be easy to accidentally catch set noise.

Speaking of, make sure your boom operator is patched into their own channel via an external device and a good pair of headphones. They need the audio played to them live in order to maintain channel integrity. Without headphones, it would be easy to accidentally catch set noise.

Seriously. In a run-and-gun situation like an on-the-street interview, do not hand the mic to someone who doesn’t know how to use it. They’ll hold it too close, or too loosely because they don’t know how much a shotgun can cost.

Microphones have sensitive parts that shouldn’t be breathed on, shaken, or, god forbid, dropped. When interviewing someone unfamiliar with industry standards, the reporter should hold the microphone. It should be 6-12 inches away from the speaker, to prevent distortion. Hold it steady!

If you’re going to mount a microphone on your DSLR, you’re going to have to be very careful. Filming an event with a one-mic setup is essentially a promise to re-record everything you hear.

Some moments will inevitably be filmed at a distance, leaving the audio compromised to distortion and noise. Set up audio devices at every juncture, if you have the time and resources.

More realistically, you could go back as the event is concluding and re-record whatever audio you can. Worst comes to worst, you don’t use shots that you don’t have sound to supplement.

A documentary crew with multiple audio capture devices spread out among different frequencies would be able to capture nat sound and interviews, all at once.

Although, recording audio in an overly large room, or “echo chamber” could lead to some unwanted noise.

Automatic dialogue replacement is only discernible when it’s done poorly. Out-of-sync audio is easy to spot and ruins a film’s immersion. It’s always best to get a second opinion on if that pesky line of dialogue really lines up with the scene in question, though sync is a job left to editors.

On top of that, sound and location have to share the same acoustics, mixed together with their combined loudness not peaking. Like sound design itself, good ADR comes with a lot of practice, and it can be a difficult craft to master. Plus members will find an instructional course here. Good ADR can solve any audio issues in post.

VO and dialogue should always be recorded in a studio environment. However, when conducting an onsite interview, audio quality may be out of your control. Getting a meaningful, cinematic shot comes first. A studio-quality microphone with directional controls will end your woes. A unidirectional stereo channel is the way to go. Boom movements will be undetectable. On the contrary, when a cheap microphone moves, you can hear the unsteadiness in the recording, causing noise and reverb.

A documentary crew with multiple audio capture devices spread out among different frequencies would be able to capture nat sound and interviews, all at once. Although, recording audio in an overly large room, or “echo chamber” could lead to some unwanted noise.

A reliable microphone captures room tone and timbre, and has mounted audio controls. It should be compact, portable, and come with a wind sleeve. You’ll only want to use a wind sleeve in outdoor situations, where ADR isn’t an option. It’s an extremely useful tool for news and documentary stories covering outdoor events. You’ll also want to purchase a lavalier mic for your reporters. It should be omnidirectional, with relatively low sensitivity.

Content creators and podcast show-runners typically purchase Blue Yeti microphones, connected to a soundboard. Though there are cheaper options, since a cheap mic works best when it’s stationary, it will take a lot more work to consistently produce great audio. Content creators who aren’t stationary, however, might want to purchase a lavalier, with wireless being a more high-end, expensive option.

The 3:1 myth, while being just that, a myth, is somewhat based in reality. Mount interviewees with wireless lavaliers. You’ll also want to mount a camera mic for safety. In the case of a celebrity interview, mic both the interviewer and the interviewee. You can use either a boom or a mounted microphone for safety, since it’s safe to pick up sound from both parties.

When filming in a controlled environment, if you don’t have the budget to ADR everything, you’ll need to be extremely careful as to where you keep your boom. An extremely helpful tip from Shazam! Director David Sanberg is to record everything normally and then go back in REAPER to reroute audio clips for certain scenes. Then, you can mix it down with room tone to create your final mix. It’s a lot of work to create audio atmosphere, but it’s undeniable that the end result sounds great.