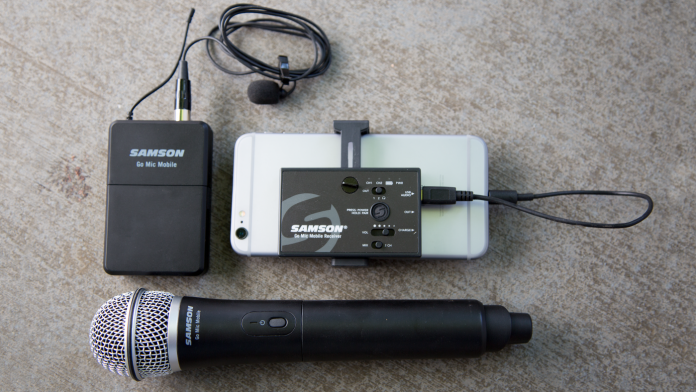 How many live streams have you seen where the audio was bad? Getting an audience to watch and take part in your broadcast is dependent on being heard. Many streamers use TV broadcast equipment to make their videos polished. This makes them valuable to both an audience and advertisers, but can get expensive fast.

If you happen not to have deep wallets, you might find yourself shooting content with your phone. It’s a simple and inexpensive workflow, but has some limitations, especially when it comes to audio capture. With the Go Mic Mobile system, Samson wants you not to settle for the built-in mic of your smartphone. Configure the Go Mic Mobile with either a lavalier or a dynamic wireless handheld mic. Better yet, use both at the same time.

No matter if you are shooting live or capturing video for some other use, having good sounding audio is key to a professional product. Samson designed the Go Mic Mobile’s receiver work with both iOS and Android devices, though because of differences between smartphone models and their native camera apps, Android users may need to rely on a third-party app to record via the Go Mic Mobile.

Could this be the most diverse and affordable mic system on the market?

They didn’t stop there, however — you can even plug it into your camera for a more standard mic set up. Could this be the most diverse and affordable mic system on the market?

We’ve been waiting: Is it worth the wait?

We first saw the Go Mic Mobile in January at CES 2017. We loved the concept and functionality enough that we named it our best microphone of CES 2017. Its simple design makes you wonder why a product like this isn’t already on the market. Although there are many mic systems designed for smartphones, the Go Mic Mobile is unique within the marketplace. Because you can use it on your phone or camera, it stands out as an excellent value. There is no need to have separate wireless mic systems for your camera and your phone; you get both in one product. We wanted to try the system for ourselves. It impressed us when first released, and it continued to surprise us, even through the testing process.

The first setup we tested was straightforward — hooked up to an iPhone 6 Plus. There isn’t any need to pair the transmitter and receiver, as they come paired from the factory. However, if needed, it’s a quick and painless process. We first tested with the lavalier. We plugged it into the lightning port and immediately it was ready to use. The same was true of the handheld mic. We like that you can use both the lav and handheld mic at the same time through one receiver. A great application of both mics would be interviewing people on the streets. The interview wears the lav and uses the handheld to get the answers from the interviewee.

We took the setup a step further and hooked the iPhone up to the Sling Studio, a wireless live-streaming switcher that operates off an iPad. It can have inputs from wireless HDMI transmitters and even allows the iPhone as an input. We had two cameras hooked up for a product shot and a wide shot of our host. Then we used the iphone as a third input with the Go Mic Mobile plugged in to it. This gave us all we needed for strong, clear and present audio of the host for the live stream. It was very easy to set up the Go Mic Mobile, so easy, we did it twice, just in case we got lucky. Sure enough it’s just easy — we didn’t need luck!

We know what you’re thinking, at $250 dollars for a mic for your phone is a bit steep. We’d agree if it didn’t also work with your camera. We took the output of the receiver, plugged it directly into a Canon 5D Mark IV and had wireless audio for our camera. Just like with the iPhone, it just worked — nothing complicated.

Going from the on phone mic or on camera mic to an actual mic system is a big improvement. But, that would be true even if the system wasn’t much good. Luckily for Samson, this is more than just an improvement — the mic captures good sound. They don’t offer any strange noises, hums or other connection issues. The value of the Go Mic Mobile comes from its flexibility. Use one mic or use two, plug it into your phone or plug it into your camera — it does it all and sounds good, too.

As stated before, currently in the market, there aren’t any mics that are for both smartphones and cameras. This doubles the application and doubles the value. Sure, you could get a smartphone input device and plug your wireless mic into it, but that requires buying a dedicated product to input your signal. The Go Mic Mobile does both without anything extra that you can’t use with either application. Combine that with being able to have two mics into one receiver, and the Go Mic Mobile is on an island of its own.

It’s rare for us to rave about a product with such a reasonable price tag. It’s easy to be impressed by an expensive piece of gear that doesn’t have to compromise to maintain an affordable price point. The Samson Go Mic Mobile, however, is an affordable yet versatile tool that will improve your audio regardless of what you are shooting on.  It’s easy to set up and sounds good. If you are looking for a mic for your smartphone, or even one for your camera, you should consider the Samson Go Mic Mobile. It impressed us, no matter the application.

The Samson Go Mic Mobile is a simple and easy to use wireless lav, handheld or both. It can be used with a smartphone or a camera. It sounds good and has an impressive list of applications.

Chris Monlux loves reviewing audio products, however it makes him feel like a big nerd. He is also Videomaker’s Multimedia Editor.