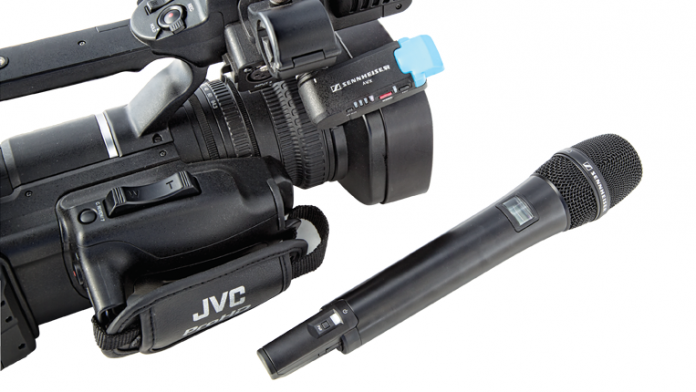 Audio is an aspect of production many of us tend not to put a lot of thought into. We get wrapped up in the aesthetics of the image, the mise-en-scÃ¨ne, the story, the lighting, what filters to use, camera blocking and a million other things. We don’t want to think about getting great audio; we just want it to happen. This thought process is obviously offensive to audiophiles and individuals who love to geek out on the technical aspects of audio acquisition, so to those, we apologize. To everyone else we understand you, and apparently so does Sennheiser. The new Sennheiser AVX wireless microphone system is designed for one man bands and small production crews who don’t want to stress about the audio, they just want it to work without worry. It is for reason that back in April we awarded the Sennheiser AVX system the best mic of NAB 2015.

The new Sennheiser AVX wireless microphone system is designed for one man bands and small production crews who don’t want to stress about the audio, they just want it to work without worry.

With this review, we wanted to determine if that elation is from overhype on the product floor of NAB, possibly exacerbated by the excitement and the extra curricular activities of Las Vegas, or if this microphone system is the messiah we wanted to believe it was. Spoiler alert: The Sennheiser AVX system is really, really fantastic for those of us who cannot afford an on-set audio engineer or are run-and-gun ENG producers struggling just to get the story. Perhaps messiah is a stretch, but it is definitely a savior. Obviously, no product is perfect and the Sennheiser AVX system is not without flaws. For our tests we were loaned the handheld mic system rather than the lavalier set up, so everything was done with the handheld mic. However, those of us who have had experience with Sennheiser’s G3 series know Sennheiser can make a good lavalier microphone. We will mostly focus on the receiver and the interaction between the receiver and the mic. This is where the product gets really exciting.

The form factor for the receiver is not like any that have come before it. It’s small, light and intelligently designed. It looks more like an old-fashioned gun with an XLR plug protruding ninety degrees from one end. It’s this physical design that allows you to just plug the receiver directly into your camera, it is small enough and light enough to fully attach to the camera — or audio recording device — via the camera’s XLR plug. The receiver rotates almost 360 degrees, so two units can plug in right next to each other. If you are a DSLR shooter, no worries. There is a small hot shoe adapter that the XLR plug of the receiver just slides into, and the unit is wired to the camera via a provided XLR to 1/8-inch cable. If you haven’t picked up a pattern yet, you will; everything on this system has been designed to be simple and easy to use.

The receiver does not take AA batteries like the G3 series; instead it has a proprietary battery that clips on the side, but more on that later. There are only a few buttons: one for pairing, one to check the battery level and an AF button that controls the levels leaving the receiver into the camera.

The handheld microphone is not breaking any ground in form factor. It looks like almost every other handheld mic on the market. The battery for the microphone is a long cylinder that slides into the bottom of the mic. There is a small LCD screen near the top of the mic that indicates battery level and whether the unit is paired or not. In all of our tests, the receiver and microphone paired automatically, but if need be, pairing is as simple as pushing a button.

The Sennheiser AVX system works in the permit-free 1.9GHz range. Sennheiser introduced a super cool feature, something they call Link Protection, for the AVX. If the receiver detects any interference, the two units will hop to a different clean channel before any issues become audible. It does this on its own intelligently, so, again, the filmmaker or ENG doesn’t have to think about it.

Another neat feature of the Sennheiser AVX is that you just set the output level once for your device and the AVX will do the rest. The unit has the ability compensate for inconsistent levels. For instance, when an interviewee starts to talk at a whisper, it will increase the volume, and if that person then yells, it will decrease without distortion — all without affecting the noise floor in a noticeable way. Much of this design is for people who just want to set and forget their audio system.

Sennheiser moved away from using AA batteries like on the G3 series and replaced them with a proprietary rechargeable Li-ION battery that, fortunately, will charge via USB and has a decent duration at about four hours for the receiver and about fifteen for the microphone. When the batteries die, you either need to pop them on the charger for a few hours or have extras on hand. It is not nearly as convenient as regular AA batteries. Sennheiser does try to help with this by allowing the receiver to detect the 48V from the camera and automatically shut off and on with your camera, saving battery usage. The limited batteries are the real drawback for this package. The second fault is the range of the unit. At about one hundred to one hundred fifty feet, the range is about half that of the G3 series, though it probably won’t be much of a problem for the majority of shooters.

The Sennheiser AVX system is priced at $1125 for either the handheld microphone or lavalier setup, or $1625 for both. It is not an inexpensive solution, being priced at the higher end of the mid-level setups. For us however, the price is well worth having something that is simple and just works. The lack of control is nerve-racking when you first start using the product, especially if you are used to the G3, which is full menu of options. Sennheiser is very clearly targeting ENG’s and small production crews who want a easy, consistent audio solution. The product is a real pleasure to use and works as advertised with the only real problems being the proprietary batteries and the lack of range. For the majority us who would rather worry about the image we are capturing than the quality of the audio, this product is a wonderful addition to your arsenal.

Jason Miller is a professional filmmaker, editor and visual effects artist whose work can be been seen in feature films and national marketing campaigns