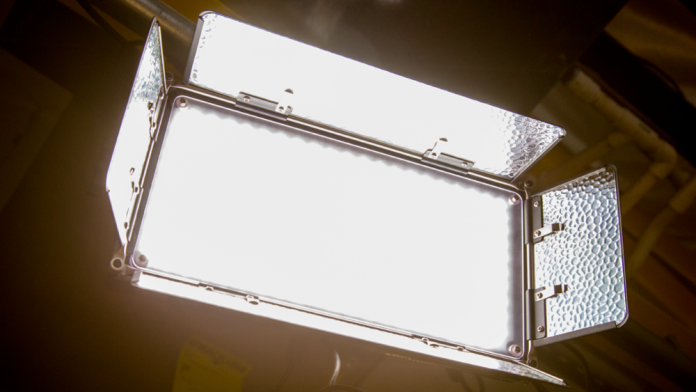 When we met with ikan at NAB this year, their expected price for Mylo was less than the final release price, but not by much. At $500-550, both the daylight and bi-color options are still a great value for the price.

If you’ve never heard of ikan, then you probably haven’t been searching for big value with a small price tag. Founded in 2005 and starting with a single on-camera LCD video monitor, today ikan offers more than a thousand products from gimbals to lights to camera rigs to monitors. Just about every ikan product is modestly priced and is typically a good value.

The timing couldn’t have been better when we received both the daylight and bi-color versions of Mylo. We had just reluctantly returned a bunch of lights we had been using and testing in our studio. We were hopeful that the two Mylo lights would be suitable replacements for the lights that were leaving, which were three to six times more expensive than the Mylo. Even though the Mylos weren’t perfect replacements, it was impressive what these two lights could put out. They’re surprisingly bright for their size.


They’re surprisingly bright for their size.

Prior to the light change, we shot in 3200K tungsten with our backlight in daylight for a nice blue rim. Starting with the daylight option allowed us to go full daylight, and we now find the mood of the room to be far more fresh than it was under the warm glow of tungsten.

Previous LEDs we’ve reviewed from ikan had great barn doors. We were happy to find out that those same barn doors come on the Mylo. They are easy to position and stay in place well, and because they are reflective, they not only help block the light, but intensify it a bit, too. The yoke and mount are just the right size, position easily and stay where you want them.

We installed both Mylo lights together in the studio with the daylight for our key and the bi-color at daylight for our fill. Without the included Neutral Density Filter installed to provide minor diffusion, the light quality was a bit hard, and to use them in our application they needed to be diffused. The increase in LED-count from the 508 helps with micro-shadows, but the lights still needed diffusion. The provided filter did help a bit, but if it could be installed a bit further from the LEDs themselves, the diffusion would be better. Keep in mind, in our application the lights are about nine feet in the air and four to five feet from the subject.

Our first use for them was lighting a low light test for a head-to-head action camera review of the GoPro HERO5 Black and the Sony FDR-X3000R. Each of these cameras has different exposure controls, so we set them both on auto and dimmed the lights by 10% at a time to see which camera introduced noise first. The dial on the back of both lights is the same: It's easy to control and gave 1% increments from 100% down to 10%. After 10% intensity, the next step down is off. We don’t see this as a problem, but is noteworthy since this is a bit different than other dimming controls we’ve experienced with other lights.

On the bi-color model, the same dial is used for both dimming and color temperature change. A click of the dial switches controls. It’s made of plastic and protrudes a bit. We’d suspect, because of this, it will be more susceptible to damage during transit.

When running off the batteries, the Mylo is just as powerful as when running off of AC. With the included batteries, the lights lasted a bit over two hours at full power. The color quality did not seem to be affected while battery powered.
The Mylo is meant to be a portable light, and as such, the build quality is stout and the barn doors fold up so they are flush and against the body of the light. Still, we would recommend getting a case if you intend to do a lot of traveling with them.

With so many LED lights on the market, it’s hard to find a place to begin, but we have attempted to compare the Mylo to two different products that are as close to an apples to apple comparison as we could. Here's what we found.
The Dracast Cineray Series X2 Bi-Color LED Panel is $580. Similar to the Mylo with a CRI of over 95, the Cineray has a CRI of greater than 96. It’s bi-color and can be powered off a V mount battery. The Cineray is longer than the Mylo by six inches and has 1092 LED’s compared to the 800 of the Mylo. It’s dimmable, comes with barn doors and has similar yoke and receiver. The icing on the cake is that it comes with a soft case.

Next up is the AXRTEC AXR-A-1520BV Bi-Color LED Light Panel at $595. It’s also bi-color, can run off a V mount battery and is dimmable. It’s a larger by double and has almost double the amount of LEDs at 1520. It has a CRI of equal to or less than 95. The only downside we see is it’s not quite as road-ready as the Mylo.

Of the three, the AXRTEC AXR-A-1520BV is the best value. It has far more LEDs, is larger and has the same CRI. The big take away is that it’s the same price and you get more. A bit of a no-brainer when it comes to specs on a page. The Mylo performs great, and because we weren’t able to get them all in to compare, its hard to say on specs alone that it would be a better light. In any case, all three look to be a good buy.

We liked the ikan Mylo Portable LED Field Lights. Of the two tested here, the better value is the bi-color option because, for only $50 more, it can be used in many more situations.  Both models are bright, offer nice quality light and are built to travel. Their real value will be experienced most by those that need an on the go, ready for production light.

You can get cheaper lights for video production, but we found the value of these lights to match their price point when ruggedness and portability are factored in.

The ikan Mylo is a small yet bright LED panel. It isn’t the cheapest LED on the market, but the bi-color model in particular offers good value for ikan’s asking price.

Chris Monlux loves to shoot with good lights, but who doesn’t? He is also Videomaker’s Multimedia Editor.