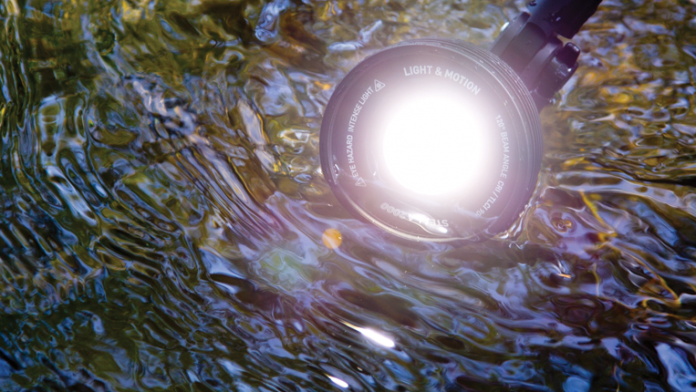 What’s in the box?

Light & Motion provided the Stella 2000, light modifiers and mount kit for this review. The light comes with two mounting options: a ¼-20 mount and cold shoe mount. With the mount kit, three more options were available with a pistol grip, C-stand mount and bar or pole mount. Moving on to light modifiers, the Stella 2000 comes with barn doors and 50-degree Focus Optic lens. Within the optional modifier kit, you’ll find a 25-degree fresnel lens, glo-bulb and a 3-inch speed ring and gel holder.

The light is battery powered by an internal lithium-ion battery that cannot be swapped out. Depending on the intensity being used, the battery can last from 50 minutes to nearly 7 hours. Rated at 2,000 lumens, the light is very bright when at full intensity but can be dimmed all the way down to 300 lumens. The Stella 2000 achieved a 90 CRI and TLCI rating and operates at 5000k.

When first powering up the Stella 2000 we were taken aback by the brightness. It even has an eye hazard warning printed on it. For being a small, very portable light, it packs a punch but also offers a range of intensity if its full power isn't needed.

We did find it to be a bit difficult to use when shooting an interview in a news production setting. The light was so bright that the subjects experienced a bit of discomfort. Just looking in its direction with any modifier except the glo-bulb was blinding. Even when shooting without a modifier, it left a flashbulb effect in the subject’s eyes. It’s good there’s a warning on the light, because it’s very easy to turn it on. We experienced a few accidental looks down the barrel as the light fired on; don’t make our mistake.

The quality of the light was quite nice. We loved to use the glo-bulb whenever shooting people. Of the included modifiers, it offers the softest, most flattering light. However, by itself, in extremely dark shooting scenarios, the light wasn't bright enough when fitted with the glo-bulb modifier.

It’s size was perfect for run-and-gun shooting. We used it for our NAB coverage, and in most cases, it fit the bill. Other than occasionally blinding our subject, the shots turned out great. Oddly enough, in this situation, we found the light worked the best without any modifiers. The tight beam of the fresnel was nice for a highlight or back rim light, and the 50-degree focus optic lens was nice when combined with the control of the barn doors.

What really caught our eye on this light was the fact that it was rated for 100 meters underwater, and can supposedly withstand multiple drops from one meter onto cement. These are not normal features of video gear, so we felt it was necessary to test them.

What really caught our eye on this light was the fact that it was rated for 100 meters underwater, and can supposedly withstand multiple drops from one meter onto cement.

Although we weren't able to dive with the light, we did submerge it while it was on, filming the results with a GoPro HERO4 Black. It performed great and was very bright, even when in cloudy water. If using for underwater shooting, this light would offer ample power to get the shot you need. This isn't an option that every video producer needs, but is nice to have for those interested in underwater videography.

Next, we put the lens to the durability test. Light & Motion says it can drop from one meter onto concrete. It's important to understand that the rating is based on the light not being on. They do not recommend the light being powered on when dropped, but we know you don’t have that choice, as most do not intentionally drop their lights. However Light & Motion did state that even if you had the light on and it happened to drop and malfunction, they would guarantee it under their warranty — though the light would likely need to be fully replaced.

We wanted to test it out, so we dropped just a bit below it’s 1 meter threshold, and sure enough, after being dropped, it turned on, and all was good in the world. It’s important to note that we dropped it on short industrial carpet over a cement slab. Because we wanted to get multiple takes for a video of the drop, we dropped it a second time with our camera at a different frame rate. Again, it performed as stated.

The Light & Motion Stella 2000 is $850. Light & Motion also offers a 5000 lumens option for more than twice the cost of $2,300 and many smaller options for different video applications that cost less than the Stella 2000. We feel it’s a good value because of the quality and intensity of the light, plus you can drop it and use it underwater.

Our recommendation is based on your personal usage. While the light is intensely bright, but there are cheaper lights that are just as bright and have comparable color rendering. What you’re paying for with this light is durability and submersibility. If you need these two features, the Stella 2000 is a very safe buy.

The Stella 2000 by Light & Motion is super bright, offers a nice quality of light and is small enough to easily be toted around. Its ability to be dropped and function underwater is a cool party trick for some and a big value for others. Overall the light works nicely, has nice light quality, good intensity and some cool, exclusive features. It’s a great light with good value, so if you need an underwater, compact, robust and bright light, The Stella 2000 might be for you.