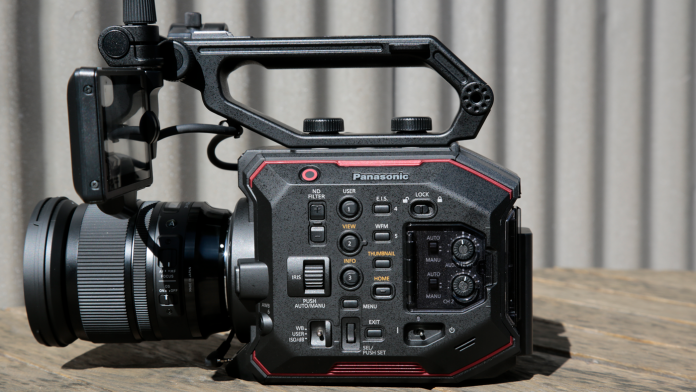 The Panasonic EVA1 was announced at Cinegear on Paramount’s backlot in Burbank, California. Panasonic baited the public for the months prior by having the EVA1 under a veil at NAB. When we finally got to see what it looked like after all that build up, we thought it looked just like an FS5, so we figured the specs must be good.

There are two specs that stand out on the EVA1: Dual Native ISO and 10-bit 422 internal recording to a SD card. Let’s start with the first part: Dual Native ISO. If you’re not familiar, it’s a technology first offered in Panasonic’s VariCam line. Simply put, the camera has two seperate native ISOs. A camera set at its native ISO offers the least amount of noise possible. That is why it was exciting to hear that this tech was in the EVA1. Since the announcement, Panasonic launched the GH5s, which also includes Dual Native ISO. Just like with the GH5s, we aren’t too impressed by what you get from Dual Native ISO in the EVA1.

The two native ISOs on the EVA1 are ISO 800 and ISO 2500. When properly exposed, the two ISOs should have the same amount of noise, but this is not the case. Though it’s not significant, the higher ISO does produce more noise. We found noise starting at ISO 1600, but we could live with it. It stayed steady when going in to native ISO 2500. At ISO 3200, the noise is just slightly increased, but past ISO 4000 noise reduction will be required. That means noise starts at 1600 and slowly ramps up to ISO 4000, where it will require noise reduction.

Because of the EF lens mount, Panasonic gave EVA1 users a huge selection of lenses to choose from. For this review, we shot on the Sigma 18-35mm f/1.8 DC HSM Art, which costs 800 dollars, and the Sigma 24-105mm f/4 DG OS HSM Art, costing 900 dollars. Both of these lenses were included in the review kit from Panasonic. We found ourselves shooting the 18-35mm mostly because, with the Super 35 crop factor of 1.5x, you get an effective focal length of 24-50mm. Sigma puts lots of value in their Art glass line, making it a great choice for low budget filmmakers. Lastly, we shot with the Canon EF 50mm f/1.2L USM, priced at 1,450 dollars. This is our favorite lens to use in the studio. When in a controlled situation, the large aperture gives beautiful bokeh.

The small form factor, grip and fully articulating monitor give the EVA1 great ergonomics. It’s light enough to shoot without weight being an issue. The grip is easy to adjust and is contoured to your hand. It has a myriad of buttons on the side and grip. We didn’t love their original assignments, but they are reassignable. ND filters are a must for video work, and the NDs built into the EVA1 work great. The handle on top disconnects with easy thumb screws. They’re even spring loaded to come off easy with one hand.

Comparing the design to other cameras, the monitor articulation is far superior to the Canon C200. Although, they both use the same location, the EVA1 monitor position is easier to adjust. Though we like the easy adjustment of the grip with a lock that can be operated with one finger, some of the positions prevent the camera from sitting flat on a table. This could be an issue for documentary shooters who might not always have a great place to set the camera down. A simple way around this is to just be aware of it and adjust accordingly. Finally, the mic clip on the handle is a bit small and won’t hold all mics. For instance, during testing, we found a Rode NTG3 is too thin to mount properly, but the Rode NTG2 fits just fine. 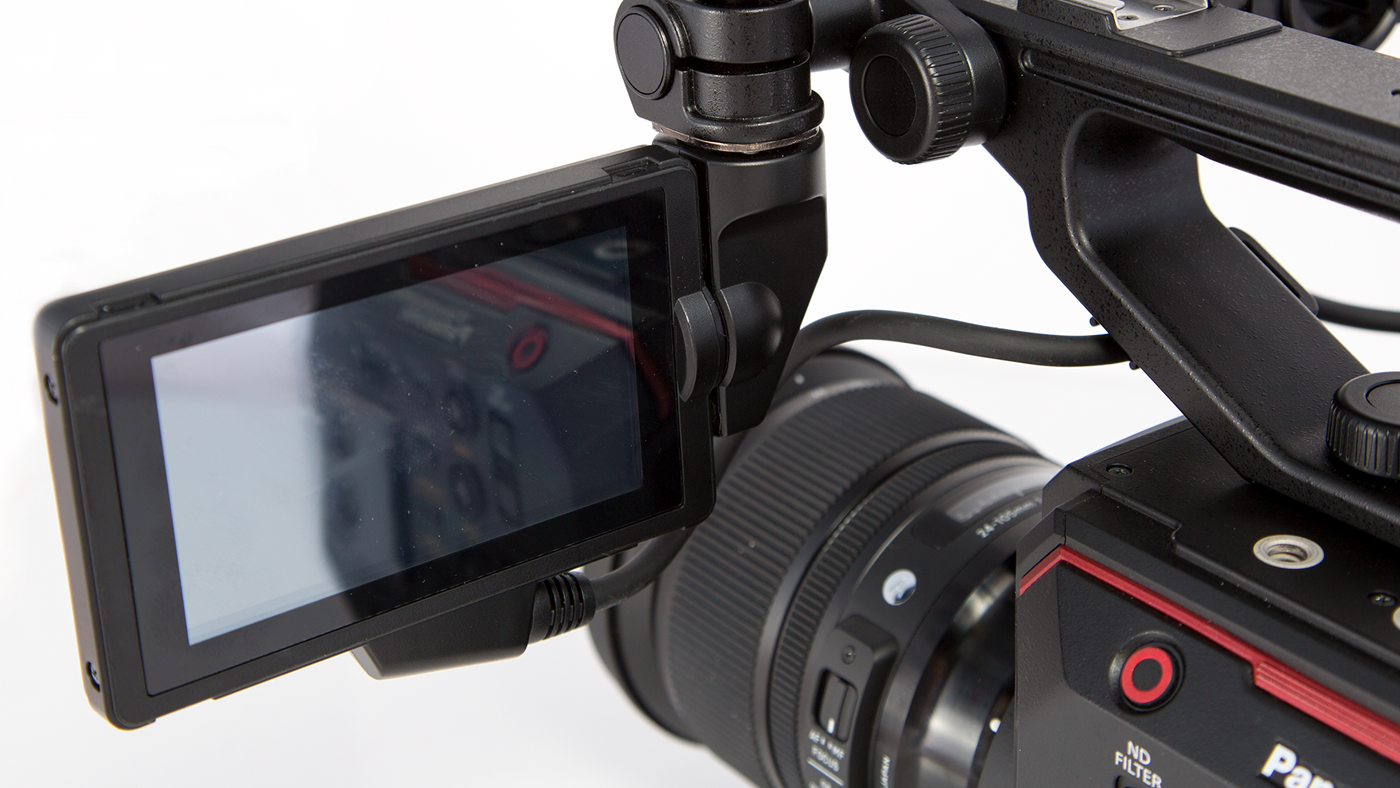 The EVA1 can capture beautiful images, but Panasonic doesn’t make it easy. The fact of the matter is that the monitor is not good. It’s hard to see it when outside the studio, and even when in the studio, we would have liked a brighter monitor. Not only was it hard to see because of tons of glare, the text on the screen is very small. It’s out of the way, and that’s a bonus, but the scale of the information is too small to read easily. Last but not least, the touch function is no good. It doesn’t always respond when touched and there is no touch to focus.

If the weak monitor weren’t enough, there’s no electronic viewfinder (EVF) either, so if you need to block out the world, you’re out of luck. Almost every review we found agreed, whether from pro or consumer. It appears Panasonic knows it, because they shipped the review unit with a Zacuto EVA1 Z-Finder for us to use during our review, making it function more like the FS5. We felt it necessary to review the camera as is, so we refrained from using the Z-Finder.

Don’t buy the Panasonic EVA1 unless you have money for an external monitor or EVF. I wouldn’t be too happy with my 7,500 dollar purchase if I were forced to use the included monitor. It’s bad.

Additionally, the menu system is somewhat confusing. We were constantly looking for menu options and didn’t find them where we thought they would be. For example, if you’d like to change the resolution, it’s not in record settings, output settings or camera settings; it’s within system settings and then within sub-menu called system mode. Using the touch functionality for menu operation is not recommended. Save yourself some hassle and use the dial on the side of the camera for navigation.

The sensor in the EVA1 is a 5.7K Super 35 sensor. However, that doesn’t mean it captures 5.7K footage internally. Instead that 5.7K is downscaled to DCI 4K unless you use SDI out to an external recorder. 5.7K is only available when outputting RAW via SDI. The internal capture is disabled when outputting RAW.

The 5.7K capture allows for electronic image stabilization (EIS) to be used in 4K. The added resolution above 4K is used to crop out the edges for a digitally stabilized image. There is also an additional crop when shooting at 240 frames per second (fps).

Another stand-out feature of the EVA1 is its 14 stops of dynamic range. That’s four more stops than the GH5. However, in its category, it’s status quo. It has the same dynamics as the Sony FS7, but the URSA Mini Pro 4.6K beats it with 15 stops, as does the RED Raven with 16 stops.

We already covered the low light performance of the EVA1 with ISO 4000 being the point at which you start needing noise reduction. We also tested rolling shutter and moire in our controlled studio. For rolling shutter, we panned the camera starting out slowly and building up to a whip pan. We focused on a straight yellow pole to see how much it bent due to rolling shutter. Although the EVA1 does suffer from some rolling shutter, it is not significant. It’s likely that the amount of rolling shutter it produces will only show up in a few situations when shooting a fast moving subject like the propeller of a drone. To test the moire, we shot a DSC labs SineZone chart. The chart is designed to identify chroma moire. The EVA1 offered no morie problems at all.

Panasonic released EVA 2.0, the first free update, in the middle of our review process. Among other things, it offers 400 megabits per second (Mbps) capture, up from the 150 Mbps previously offered. The update was easy to download with a file size of 32.2 megabytes. It was also super easy to install. All you have to do is copy the file onto an SD card, put the SD card in slot 1 and execute update within the menu. It was very fast. Some updates are painful, but not this one. The EVA 2.0 release also allows for RAW output via SDI up to 5.7K.

To test the quality of the new ALL-Intraframe (ALL-I) 422 10-bit 400 Mbps capture, we put it up against 422 10-bit ProRes. There were no significant differences between the internal capture and the ProRes captured by an Atomos Shogun Inferno. Additionally, the file size is larger with ProRes, which has a bit rate of 503 Mbps. Intraframe video requires less processing, allowing lower performance computers to have real time playback. The update also brought more data rate options when shooting in variable frame rates. HD will now capture up to 120 fps at 400 Mbps. There are also higher bit rates for ALL-I codecs in all resolutions, with 400 Mbps for 4K and 200 Mbps for 2K and below.

Just a few years ago, there were no cameras in this category. Then came the Sony FS7 and through its success, others followed. To evaluate the value of the EVA1, we’re going to look at interchangeable lens cameras that have a Super 35 image sensor, shoot at least 4K and have a log profile, ND Filters, XLR inputs and exterior controls.

First up is the budget friendly Blackmagic URSA Mini Pro 4.6K at 6,000 dollars. It is the most affordable camera in this category. It has a 4.6K Super 35mm CMOS sensor that will capture up to 4608 x 2592 video at up to 60 fps. It captures to dual CFast 2.0 cards in CinemaDNG or ProRes in either 444 or 422. The Ursa Mini Pro 4.6K has a full set of external controls and 2, 4 and 6 stops of ND. It has two XLR inputs with phantom power and has 12G-SDI output, timecode and REF input. There are three things to consider about the Ursa Mini Pro 4.6K: It has no EVF, its ergonomics are weak and its body alone weighs 5.1 pounds.

Next up is the Sony FS7 for 7,500 dollars. It also has a Super 35 CMOS sensor but a Sony E lens mount. It shoots up to 60 fps in DCI 4K and up to 180 fps in HD. It shoots on Dual XQD memory cards and has dual HD/3G-SDI and HDMI output. It shoots internal XAVC-I at up to 600 Mbps, and its grip is the best in class. The FS7 also lacks an EVF and is on the larger size with the body alone weighing 4.4 pounds.

Last up is the Canon C200 for 7,500 dollars. It has a Super 35 CMOS sensor and is the only camera in the category to have an included EVF. Additionally, it has wonderful autofocus and multiple workflows, depending on the work the camera will be doing. If you don’t require or want the EVF, Canon offers the C200B, which has no monitor, grip or EVF and goes for 6,000 dollars. The C200 captures Canon RAW Light to a CFAST 2.0 card or MP4s to dual SD cards. Shooting up to DCI 4K and up to 120 fps in HD, it has a built-in grip, handle and two XLR ports. Lastly, it’s the closest to the EVA1 in weight at 3.2 pounds vs the EVA1’s 2.6 pounds.

There are a few issues with this camera: The menu is difficult to navigate and the monitor is subpar. The thing is, the footage it shoots looks great. Shooting 10-bit 422 to SD cards makes it an easy camera for most workflows. You can capture RAW, but an external capture device is required. The EVA1 looks great on paper, but offers quite a few usability issues. Those usability issues can be overcome with third party accessories, but the question is, on top of its price, do you have the budget for everything else you’ll need?

Chris Monlux is wondering if long beards will become today's version of the mullet. He is also Videomaker’s Multimedia Editor.