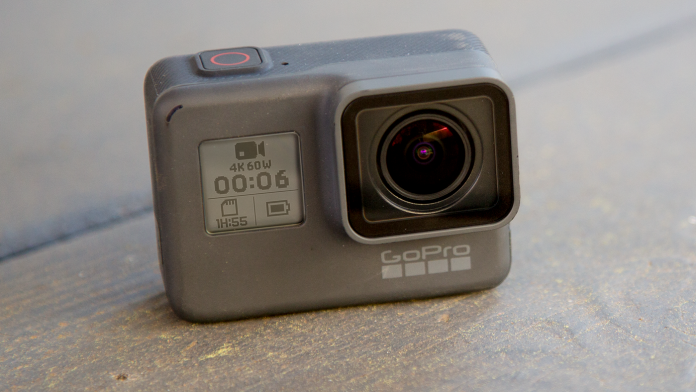 Over the last year, GoPro has seen their share of ups and downs, from the recall of their first ever drone, Karma, to the slow initial sales of the HERO5 Black. Amidst all this, the brand went public — and the public hasn’t been kind. The headline “GoPro killer” followed every major camera released that competed against it. However, GoPro persevered. They fixed the issues with Karma, and with their latest product launch, the HERO6 Black, GoPro is offering some unique features.

The action camera market began with GoPro — the name is synonymous with the form factor. However, with the huge number of knock-offs and weak new features, it looked like GoPro had plateaued. Meanwhile, behind closed doors, GoPro was hard at work on the new GP1 processor. The GP1 has more GoPro intellectual property than anything they’ve made before. As GoPro CEO Nick Woodman put it, “In the HERO6 Black, we have just begun to see the potential of the GP1 processor.”

On a foggy morning in late September at the Academy of Sciences Museum in San Francisco, GoPro announced the GoPro HERO6 Black along with their first 360 camera, Fusion. The HERO6 Black looks just like its predecessor, the HERO5 Black. The only difference externally is the stamped HERO6 on its side. However, don't let its familiar exterior fool you; there are some big new features.

Starting from the top, it shoots up to 60 frames per second (fps) in UHD 4K, up to 120 fps in 2.7K and 240 fps in HD. There is now the ability to zoom when in Linear or Wide FOV, though only when not recording. The last big new update is new image stabilization. Unlike the HERO5 Black, which only had X and Y-axis digital stabilization, the HERO6 Black has X, Y and rotation digital stabilization, along with dedicated hardware to de-warp based on the motion sensors. GoPro calls it gimbal-like, but we’ll touch more on that later.

The HERO6 Black captures 12 megapixel (MP) photos at up to 30 fps. It has three field of view (FOV) options, two of which allow you to zoom in and narrow your FOV via a crop of the sensor without resolution loss. Not all FOV options are available in every resolution. 2.7K offers all FOV options: Superwide, Wide with zoom and Linear with zoom. Move up to 4K and you are limited to Superwide and Wide without zoom. The 35mm equivalent range for Wide with zoom is 16mm-33mm. When shooting in Linear FOV, it’s 24mm to 49mm.

Like the HERO5 Black, the HERO6 Black is waterproof without a housing down to 33 feet. However, you will still need to put the camera in a cage to connect it to any of the numerous mounts. The Fusion hints at how GoPro might address a built-in mount, but the HERO6 Black still needs a cage. The HERO6 Black also offers voice control, a rear touchscreen, Wi-Fi for monitoring and control, and interval capture for time-lapse.

We were in San Francisco for the HERO6 Black and Fusion product launch and were able to immediately start using the HERO6 Black in a multitude of situations. We started out by testing out the new image stabilization (IS). While walking down the world-famous Pier 39, we captured both with the IS on and with it off. The improvement over the HERO5  Black is impressive. Moreover, it rivaled the optical steadyshot IS on the Sony FDR X3000’s action cam. When GoPro revealed their new IS, they called it gimbal-like, and while it is impressive, it’s not so good that you should throw out your gimbal.

The frame rate improvement on the HERO6 Black is well wanted. You’ll get a cinematic 2.5 times slowmo in 4K shooting 60 fps and slowing it down to 24 fps. Even better is 5 times slomo at 120 at 2.7MK and 10 times slowmo in HD shooting at 240 fps. Because the exposure is being controlled in high light situations by the shutter speed, there is still significant staccato in highly lit situations. Contrary to that, in low light situations, you are going to pay for your exposure with a higher ISO because you can only lower your shutter speed so much. There are aftermarket ND filters available to mitigate these issues.

The frame rate options on the HERO6 saw great improvement over the HERO5.

Whenever we are reviewing a camera, we are constantly going into the menu and changing the settings. In many cases, we end up hating the menu system. GoPro didn't change the menu from the past camera; it's still just as intuitive with the same user experience as the HERO5 Black. A simple touch menu is always a good thing.

There are two ports on the camera: a USB-C and micro HDMI. For an additional 30 bucks, you can plug a ?-inch mic into the camera; however, you will loose the waterproof capabilities on the camera. The bay door covering these ports is removable if needed. To work with a Karma grip or drone, you’ll have to remove it. This is the same door on the HERO5  Black and they are interchangeable — and equally prone to getting lost.

Outside of capturing test footage, we were able to take the HERO6 Black into the field for two different projects. The first is for a sorority recruitment video. They wanted lots of slow-mo and smooth movement. Because the HERO5 Black and HERO6 Black fit in each other's mounts, it was an easy connection to the Karma Grip. We neglected to do a firmware update on the Karma Grip prior to the shoot, so we experienced a few problems. The camera would freeze and require us to take the battery out. Take this as a testament to the value of staying up to date on firmware updates. After doing the update, we did not experience any issues.

We mainly shot in HD in Linear FOV. This gave us the least amount of distortion and the most capability to change frame rates. Bouncing around from 240, 120, 60 and 24 was very nice. Depending on the amount of movement in the shot, we changed the amount of slow-mo we captured. At 240 fps reduced to 24 fps, you’ll get 10 times slowmo — that would mean a 2 second recording plays back at 20 seconds. Not everything looks good at that speed. Consider how long it takes the movement you are shooting to complete and how long any given clip can be in your video. If you are doing narrative work, how long something takes isn't as much of an issue. However, if you are limited in time, using a 20 second clip will be a problem.

The second project the HERO6 Black helped with was a documentary about a pedicab driver. Capturing a multitude of angles while mounted to the Karma grip, on a head mount and on a poll, we were very happy with how good the image looked. We shot in either Superwide or Wide in 4k, and because of the wide angle of view, we were able to capture a lot in a small area. This might be one of the most common uses for a GoPro for production use — mounted to a moving subject.

The pedicab driver cranks his music really loud from the bike as he rides, but the GoPro was able to capture the audio cleanly without hearing noticeable auto gain. Regardless, if it was just him talking to a rider as he rode or while he blasted the stereo, the audio sounded good and didn't clip. Still, for your audio, outside of sync and as nats, we always recommend using a dedicated mic over one in a camera. As we said before, if you want to use an external mic with the HERO6 Black, you can do so with an adapter. The adapter plugs into the USB-C port and converts it to an ? input. There is a practical reason this is a pain. However, if you are using the USB-C port for audio, you are out of luck using the USB-C for charging or powering the camera.

We took the HERO6 Black back to the Videomaker Studio where we tested its low light performance, rolling shutter and battery life. Testing the low light performance with a fixed aperture camera can be tricky. We set the minimum ISO and maximum ISO to the same setting to ensure that it wouldn't change. We also skipped using auto shutter because we needed to change the shutter to gain proper exposure. Finally, we increased the ISO and shutter speed together to maintain proper exposure. Starting at ISO 100, we started seeing noise at ISO 400. By ISO 800, it was too noisy for professional use. All higher ISOs are not going to get you a clean picture. The rolling shutter in this camera is very insignificant. Thats a good thing too, it’s a camera that is meant to be active.

Our last test is the battery life test. GoPro was able to give the same battery life as the HERO5  Black, while also offering double the framerate in 4K at 60 fps vs the HERO5 Black’s top resolution and frame rate set at 4K and 30 fps. While shooting at 4K 60 fps, expect to get 55-60 minutes of battery life. Shoot at lower frame rates, resolutions and turn off the screen if you want to get longer battery life.

Like we said before, the marketplace for action cameras is huge. Every year, when we go to the Consumer Electronics Show in Las Vegas, there are dozens of new brands each offering a GoPro type camera. Let’s look at a few of the options out there from Sony, Yi and Garmin.

Next up is the YI Technology 4K+ for $340 dollars. It shoots up to UHD 4K at 30fps and up to 240 fps in 720. It also shoots 12MP stills in up to 30 fps burst mode. It features digital image stabilization and a 2.2 inch gorilla glass LCD touchscreen. When within its waterproof housing, it can go down to 131 feet.

Lastly, let’s look at the Garmin VIRB Ultra 30 for $400 dollars. It shoots up to UHD 4K at 30 fps and up to 24 fps in 720. It also shoots 12MP stills and has 3-axis video stabilization. The VIRB, when in its waterproof housing, is good down to 130 feet underwater. It has a 1.75 inch touchscreen that works through its housing.

We were pleasantly surprised at the quality of the footage from the HERO6 Black. GoPro updated this camera in many smart ways. It’s frame rate options are currently king in the marketplace and it has impressive image stabilization. The investment in the GP1 processor has paid off, and we’re excited to see what it can do in future releases. We would like to have an audio out that doesn't require using the USB-C output, but all in all, the GoPro HERO6 Black is a great update from the HERO5 Black.

Chris Monlux gets motion sick if he looks at a boat from land. He is also Videomaker’s Multimedia Editor.