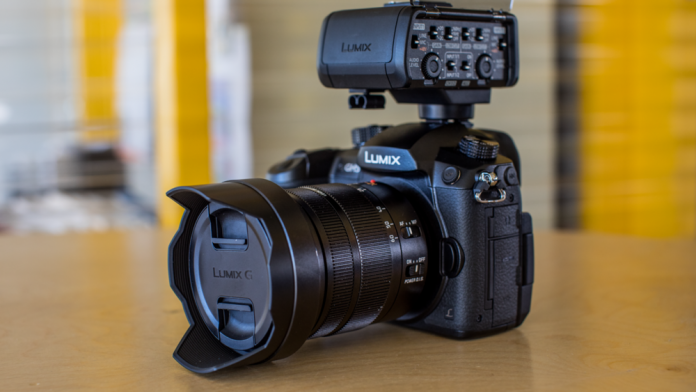 We were ripe with anticipation, salivating for the rest of the details. Finally at CES 2017, Panasonic gave us all of the details for the GH5. We were so blown-away by the specs that we gave it our Best Camera of CES 2017 award. The GH5 is poised to be the camera that best fits every-day videographers — rich with options at a reasonable price. There are so many options on the GH5 that are not found on other cameras in its price range or class.

Give me the details already!

Panasonic offers a lot of value in the GH5. Outside of having a small sensor, the GH5 has more video shooting capabilities than most of the cameras out there, regardless of price. It shoots 10-bit 4:2:2 DCI 4K at 24 or 20 frames per second, up to 180 frames per second in 1080 HD and has shoot assists like a histogram, peaking and zebras. On specs alone it has no peer in its class. But we aren’t here to just talk specs; we want to know if those features are worth using. We’re here to see if the camera functions equal to the list of its options.

We reviewed the GH5 using the Panasonic Leica DG Vario-Elmarit 12-60mm f/2.8-4 ASPH lens. We really like this lens. The build quality is good and feels stout; there are raised gears on the focus and zoom rings for easy grip and operation. The focal length is nice for walking around. Equating the 2x crop factor from a micro four-third sensor, its effective focal length is 24 to 120 millimeters. We liked its fast aperture when shooting wide, but wish it was 2.8 through the full throw of the lens. Instead, the aperture goes from f2.8 to f4, that’s only a stop, but no change would be easier to use. If you’re operating a zoom lens with a changing aperture, a good practice is to use the higher aperture to be able to shoot without having to change the exposure every time the focal length changes.

Alongside the lens, we also used the DMW-XLR1 Mic Adapter. For an additional $400 it connects to GH5 through the hot shoe. It offers two XLR inputs that are controlled by physical switches and knobs. On top of all that, it has a cold shoe mount… on the top. Plus, no batteries needed; it’s powered by the camera.

Panasonic did a good thing with the GH5. They added a bunch of features, but left the good bits from the GH4 alone. Other than having a slightly different black paint than the GH4, the form factor is almost identical. They moved the record button, added in a joystick for menu operation, doubled the number of SD card slots and, one of our favorite features, added a full size HDMI port. I must have missed the spec saying it had full-sized HDMI port, because when I stumbled upon that, I said, “wow, cool!” I said that quite a few times during the GH5’s evaluation.

Data management should be on the mind when considering the GH5. When shooting in 4:2:2 10bit DCI 4K your bit rate is 150 Mbps. That means every minute of video is 1.125 gigabytes. The GH5, like the GH4 does not have a record limit, so the files can get pretty large. It will fill a 128GB card in just over two hours (133 minutes).

We tested the 10-bit video of the  GH5 against the GH4 sending video into an Atomos Shogun Inferno to be able to record the 10-bit that is available via the GH4’s HDMI out. There was no noticeable difference. The big difference is the weight and price of your rig. The GH4 is a small camera to have that sized monitor connected to it, so it’s top heavy.  Now, when we captured 8-bit and compared it to 10-bit, it was very easy to see the difference. The detail was better, giving a clearer picture and better color. That also made it more flexible when doing color correction.

The GH5’s video shooting assists make you wonder why things like histogram, peaking and zebras aren’t in every camera that shoots video. Because you can shoot internal 10-bit, having an external recorder isn't as necessary. However, the screen is still small, we found that getting the best focus out of the camera required an external recorder. Not to say that the screen isn't nice, but its size makes small details harder to identify.  The Viewfinder is still a touchscreen and functions very similarly to the GH4. The screen still flips out and articulates so you can see yourself when shooting a selfie or a vlog.

The one thing that Panasonic did change from the GH4 is the menu. Now we understand that with the additional options, there are more controls to manipulate, but we found it counter-intuitive. I found myself going past the menu option I was looking for multiple times, just about every time i operated it. I consider myself a quick learner when it comes to cameras, as I do use a different camera multiple times a month, every month. That said, we found that the menu organization was the issue. If they reorganized the menu for better collusion within categories, the camera would greatly benefit.

Like with every camera, we had to put the GH5 through an amalgamation of tests. These tests are an attempt to create collections of standard information that you might need on any given camera. We’re going to talk about battery life, low light performance, sensor stabilization and rolling shutter.

Because the GH5 will continue to record until you stop it, measuring its battery life is pretty simple. Make sure the battery is fully charged, put in empty media and press record. Then, take the recorded clips into a timeline and measure the amount of recorded time.  We found that when shooting in 10-Bit 4:2:2 DCI 4K the camera lasted 2 hours and 10 minutes. The body of the camera was slightly warm. The GH5 doesn't have a battery-life problem and it doesn't have an overheating problem.

Next, we set out to find out what the low light performance was like. We set up a shot, got our exposure right at ISO 100, then increased the shutter speed and the ISO together to counteract  each other to find out when noise was introduced into the picture. We found that at ISO 800 we first started seeing noise and anything above ISO 6,400 would not be correctable with post production software. Is low light performance even important? That depends on what you need the camera for. If you are on the go shooting as the world gives it to you, then low light performance can really help out. If you always have lights or the sun, it isn't something to concern yourself with.

When looking at the value of the GH5, it’s important to look at the rest of the market to see how little or how much bang for your buck it offers. We compare each camera’s MSRP, because prices can vary greatly from site to site and over time. The GH5 has no peer. There are no other cameras that offer everything that the GH5 does. With that said, let’s look at a few that you would look at if you were in the market.

The Sony a6500 is $1,400, which is $600 less than the GH5. It shoots 4K, but not in 10-bit. The sensor is larger, it offers 5-axis sensor stabilization and has two flavors of log. V-log is available for the GH5, but it comes with an extra price tag. The battery life on an a6500 is half that of the GH5 and it is prone to overheating. The a6500 has fast autofocus and its low light performance is better than the GH5, with noise being introduced 2 stops greater at 6,400 vs the GH5 at 800. The big kicker is where the a6500 has a shared headphone and mic jack, where the GH5 has an independant jack for each. If you’re choosing between these two cameras, you will need to evaluate if low light is a necessity for you, how long you need a battery to last, if you would like log shooting and if you will use the 10-bit internal recording on the GH5.

Next, let’s look at the Canon 80D, it costs $1,200. Now, we know what you’re saying– how can you compare the 80D that only shoots HD to the 10-bit DCI 4K of the GH5? Easy, not everyone needs resolution. Say you produce vlogs; both the GH5 and 80D have flip out screens for shooting in selfie mode and resolution doesn't matter as much in a vlog. The sensor on the GH5 is much smaller than the 80D and costs 800 dollars more.

It’s been said that you marry your lenses and you date your camera. Because of that, it’s likely that if you have a set of lenses in one lens mount, you’re likely to stick with that type of camera. Yes, we know there are adapters, but that's another added cost, and if you have micro four-thirds lenses, there will not be enough glass to cover larger sensors. Before buying, distill your needs from your wants and see what camera fits that mold. It’s the best way to get the right tool for what you do.

For $2,000 dollars the Panasonic Lumix GH5 has no rival. It’s loaded with rich video features. The sensor stabilization is a nice touch and no additional crop when shooting 4K is a bonus. The value lies in the long list of usable options. Would we like the menu to be more intuitively laid out? Yes. Is that a deal breaker? No. Is the sensor small? Oh yeah, but with the right lens combination, it’s less of an issue. If you are thinking of buying the GH5, it’s worth considering. Moreover, the best setup is combining the XLR adapter and the 12-60mm for a ready-to-go, feature rich monster that together costs only $3,400.

The Panasonic Lumix GH5 is a feature rich camera. It shoots 10-bit 4:2:2 DCI 4K video and doesn't need a lens with image stabilization to get a steady shot.  Overall the GH5 is a good value and well worth considering.

Chris Monlux loves to shoot video. He feels nothing is better than going out with an eye for composition and seeing what you can capture. He’s also Videomaker’s Multimedia Editor.