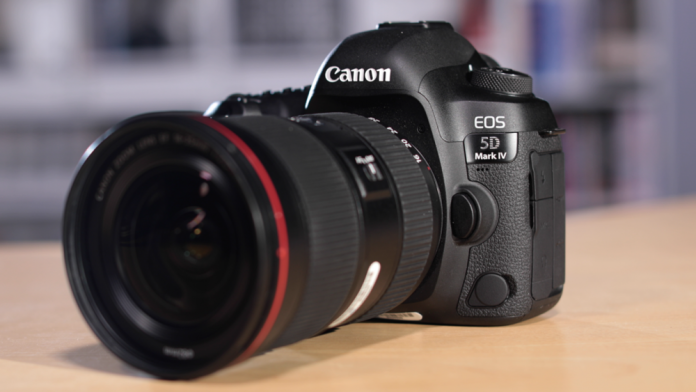 However, right after the release, many hopes were deflated in the video world when it was announced that it would have a 1.74x crop factor when shooting in 4K, though many of the other specs looked quite promising and it still shot full-frame in HD. To say we were eager to get the camera to try it out for ourselves was an understatement.

Our first experience shooting the Mark IV was on a trip Canon organized for us to shoot hot air balloons in New Mexico. Although we didn't put it through any formal testing at that time, it was good for getting a feel for the camera.

The camera feels very familiar; in fact, the Mark IV has only one more button than the Mark III, an AF Area Selection button. For video shooters, we have no use for it because the type of autofocus it controls is not an option when shooting video — only photos.

From our first encounter with the Mark IV, We had two major takeaways. The first was that it creates large files because of the enormous 500Mbps bitrate. An associated problem to large file size is the rate it needs to write to a card. Your card must be able to write 62.5MB/s just to keep up. Even so, we had a few SD cards with 94MB/s and 95MB/s write speeds that should have worked but didn’t. Stranger still, we had identical cards that worked just fine.

We were also concerned whether the high bitrate would require multiple, high-capacity cards. We started with a 128GB card with us, and although we did delete in the fields takes we were not going to use, we didn't need another card during our five-hour shoot. The bitrate is a double edge sword, with the higher bitrate, using external recorders are not as necessary to get a great looking image; however, the data you consume when shooting at that high of a bitrate is hard to manage and could cost you more to store.

The second is that the crop factor can be an issue in certain instances. Because we were shooting large hot air balloons up close, we felt the negative effects of increased crop factor while shooting. It was difficult to get the whole hot air balloon in frame because of the narrower FOV. We shot on the new 16-35mm f/2.8 USM III, which looks great, but the crop gave it an effective focal length of 28-61mm — not nearly as exaggerated as having an actual focal length of 16-35mm.

The feel of this camera is wonderful.

Our next experience using the camera was shooting a run and gun situation. The feel of this camera is wonderful. After using a mirrorless camera over the last month or so, the hefty feel of the 5D was a welcome change. Yes, it’s larger and yes, it’s heavier, but we liked the heftiness. That said, the majority of weight of our rigs are typically attributed to the lens.

We shot for five hours in this run and gun situation and didn’t encounter any unexpected limitations with this camera. We weren't shooting in tight spaces, so the crop factor did not affect this shoot.

In addition to taking the Mark IV out in the field, we put it through a slew of tests so that you can know what the camera can do and present the data so you can apply it to your use case to see if it's a good fit for you. Not all tests should be valued with the same weight as some are more important than others.

To test the low light capabilities, we shot the Mark IV starting at ISO 100 and doubling it to increase the light coming into the sensor in one full stop increments. This helps identify at what ISO noise is introduced and also at what ISO will noise reduction be required. We first saw noise at ISO 400 and at just 2 stops later at ISO 1600 or higher noise reduction would be required. This is on par with the Canon 1D X Mark II and the 5D Mark III. It’s a bit better when compared to the Panasonic GH4 but no where close to the Sony a7S II, a6300 and a6500.

We shot in many difficult shooting situations with dynamic lighting and we found that getting a shot with mostly the correct exposure wasn't too difficult. It’s no dynamic range monster but it was consistent with the Canon 1D X Mark II.

For our more formal test we shot toward an eastern facing window with the early morning sun shining directly through. While looking out the windows, it was fully lit with bright sun. Inside, although naturally lit by the windows, is illuminated by tungsten temperature lighting. We shot the same shot three times, programing the Rhino EVO Slider with Motion with the same move and used the spot meter to achieve proper exposure. The spot was position in a location that is neither darkest or brightest area of light. Then we did it two more times decreasing the exposure by one stop each time.

On the first shot when the interior was properly exposed there is still some information out the window, you can make out cars, trees and buildings. If a secondary color correction was applied to the window area alone, we wouldn't expect to get much more information from the over exposed areas.

On the second shot, closing up a stop from the first shot, the inside wasn't too dark, giving the best opportunity to pull information in the over exposed areas out the windows.

On the last shot, the darkest areas began to become too dark to be able to grade in post without introducing a significant amount of noise. Our overall feeling about the dynamic range is that it performs as expected for a photo-first DSLR — not great but not poorly either.

We don’t typically recommend using autofocus (AF) when shooting video, but sometimes it’s a necessity, like when shooting with a gimbal or when an extra set of hands is needed. If in a controlled situation, we recommend that manual focus to insure that the correct subject is in focus.

We tested the face-tracking continuous AF by placing a LEGO figure on a table and dollying away while using the AF to keep the subject in focus. The three dolly speeds we tested were slow, a shot covering 24 inches over 30 seconds; moderate, a shot covering the same area for 20 seconds; and fast, a shot doing the same thing but taking 10 seconds. We found that when moving at a modest speed, the AF worked great and tracked well, but when at the fast speed, it couldn't keep up. The AF had no problem with the slow speed. These shots were done with the Canon 16-35mm f2.8 USM III at f/2.8. We did have a case where we were not able to keep an acceptable amount of focus, but that was when we were shooting wide open at f1.2 on the Canon L series 50mm f1.2.

The touch screen AF worked great, as good as the Canon 1DX Mark II, 7D Mark II and Panasonic GH4. The 5D Mark IV was better than the a6500, but that’s not saying much.

Menu operation cannot be controlled via touch, but it’s in line with the 1D X Mark II. We would have liked a full touch screen for every function like on the Panasonic GH4, G7 and the Canon 80D.

We tested the touch screen AF by shooting wide open at f2.8. We placed three LEGO figures far enough away from each other that they had significant blur on two of the characters when focused on the third. Touching each subject on the screen, it responded quickly and changed with precision the new focus point. This is a great tool for doing a rack focus from a static shot. We had some issue touching the right area, but that was a combination of big fingers and small subjects.

Like we have already mentioned, the crop factor when shooting 4K is 1.74x, and that's pretty significant. However, if paired with the right lens for tight quarters, it wouldn't be as big of an issue. When you don't have space to back up to get what you need in frame, it’s going to be an issue. There are many issues one might have with a camera and its functions that your audience will never know about, issue with how it functioned rather than how the final product turns out. After shooting the 5D Mark IV extensively, and since we frequently use the Panasonic GH4 which has a 2.3x crop factor, the Canon’s 1.74x crop factor did not seem like a big problem.

The marketplace of interchangeable lens cameras that shoot 4K is getting more and more competitive. We looked to two other camera’s that a video shooter might compare to the Mark IV. We felt the Sony a7S II and the Panasonic GH4 would fit the bill.

No camera has matched the low light capabilities of Sony’s a7S II. That’s one piece of tech we suspect Sony won’t sell to other manufactures any time soon. With that aside, it’s not a perfect camera. The 5D Mark IV has more than double the battery life. It shoots DCI 4K instead of UHD 4K, and it doesn't suffer from overheating.

The Mark IV has a higher bit-rate than the a7S II at 500 Mbps, compared to the Sony at just 100 Mbps, but that’s a point to Sony, since the motion JPEG codec used in the Canon isn’t necessarily higher quality, but less efficient. Where the a7S II out flanks the Canon is with its full frame 4K, two flavors of LOG with Slog2 & Slog3 and the ability to output 8-bit 4K via HDMI. The Canon won’t output 4K via its HDMI output. The Sony can also shoot 120 fps in 1080 HD, whereas you only get 60 fps in 1080 HD with the Mark IV. Lastly, the a7S II is more affordable, costing $500 less.

There are a few places where the 5D MK IV disappoints. Things like HD-only output via its HDMI, few frame rate options and a larger price tag are just a few. However, the picture it produces looks great. When shooting, it feels like just the Mark III and now offers 4K. Outside of that, it’s a lackluster release for video-only shooters.

That said, we really enjoyed shooting with it and in many cases, it would be our go-to camera, even if we had an a7S II, GH4 and it to choose from.

If you have Canon glass that you love, don't own an adapter for another brands lens mount and can live with the crop factor, your audience would never know the other problems you’d experience when using this camera. The biggest problem for the 5D Mark IV is that on paper it’s far less attractive than it feels when you get to use it.

Large file sizes
Only HD output via its HDMI

The Canon 5D Mark IV is a solid follow-up to the much lauded 5D Mark III. Though the new camera is capable of 4K video recording, the 1.74x crop factor is a bit of a disappointment. Overall though, the 5D Mark IV produced a great-looking image.

Chris Monlux loves shooting more than anything else. He is also Videomaker’s Multimedia Editor.