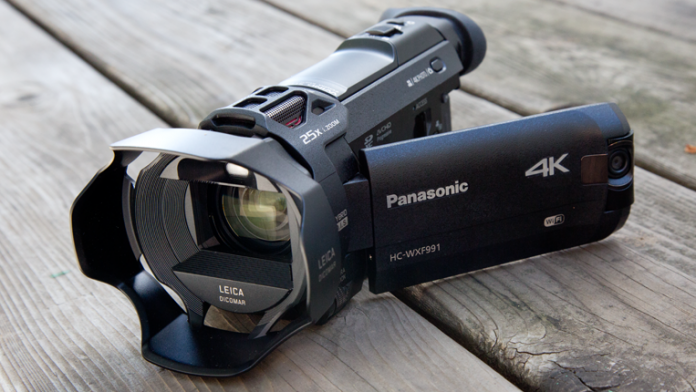 Let’s lead out with its most desirable option: 4K, or UHD 4K to be specific. At the time of this writing, there’s only one other camera in the market like the WXF991K shooting 4K: the Sony AX33. The Sony runs around $800 while the Panasonic is closer to $900. Infact, there are only 2 major differences between these two models. The Panasonic has a 20x optical zoom to the 10x zoom of the Sony, and the Panasonic has a second camera on the flip-out display that can be pointed toward the camera operator, to the side or forward for a picture in picture recording. The Sony has only the single traditional lens.

The big question we had about the WXF991K is who is that second camera for? It took a long conversation and some creative ideas to come up with some instances where the second camera would be an asset. We aren’t even sure Panasonic had an intended user for the feature, but we eventually did come up with some feasible use cases. The first is the home video shooter who wants to capture everyone within a situation, including the camera operator. The next was someone that produced prank videos or similar content types for a behind-the-scenes experience for the viewer. Lastly, we could see this as a nice option for a vlogger who wishes to show their face along with whatever they are talking about.

When we were operating the camera, we found the twin camera to be quite awkward. It appears as a picture in picture element on screen and is printed in the video. When enabled, the picture in picture can not be removed in post, so that means one-fifth of your shot is covered in a close up of you. On top of that, it’s not a very flattering angle. We would assume that many who like to shoot video, at least on some level, like that they are behind the camera, not in front of it. All of the awkwardness aside, the camera can rotate to shoot toward the camera operator, to the side or forward, so you do have some options for that second angle. To turn on the twin camera, rotate the camera out to selfie mode and it will turn on automatically.

Another notable option is that you can crop, stabilize, zoom and track a 4K shot into HD all from in camera. It takes your 4K shot and allows you to zoom into a section, select the speed of the zoom and make a new clip all within the camera. The same can be done for stabilization, tracking or a pseudo-dolly shot. As well, you can shoot a 60 fps HD clip and, in camera, slow it down to 24 fps for a slow motion shot; that’s almost 3 times slowmo. These are really usable options if you don’t want to use a computer execute those edits.

Because we are working video professionals, using a completely consumer-oriented camera is a bit of a drag. However, that doesn’t mean it isn’t a good camera, but rather we just have the desire for more manual control of the camera. Exposure and focus can not be controlled manually with the WXF991K. The only exposure tool it has is the ability to adjust the gain. Gain can introduce unwanted noise in your picture, so we wanted to test its sensitivity when shooting in darker situations.

We put it through our low light test, during which we tested all of its gain levels — 0, +6, +8, +10, +12, +18 db. We found that all gain levels above +6db to be too noisey. For the image to look its best, there must be enough light to not need to go above +6db. This is advice if you are looking for professional results. If the camera is to be used to capture memories and some noise is ok, then pushing it up +10db could be passable. And if you just need to capture the moment and get the event recorded, then the other gain levels will work. +18db allows for shooting in quite dark situations, but will look excessively noisy.

Another issue we experienced is some severe moire. In most of the situations we shot, the moire was apparent and somewhat distracting. Testing it on some coarse fabric, the moire was strong enough to make your eyes work harder. In a wide shot of a building, all fine lines danced on the screen. Depending on the device that it will be viewed on, this could be a very problematic issue. Even when given enough light, the shot will suffer.

A really nice feature that we found valuable is the 20X optical zoom.

A really nice feature that we found valuable is the 20X optical zoom. It has a very long throw going from an effective focal length of 30 mm all the way to 626 mm. That means if you are far away, it’s not that big of an issue, other than the increased difficulty level of keeping a steady shot. This is a big competitive difference to the Sony AX33, which has only half the performance with a 10x optical zoom. That means you can only reach something half as far away. If shooting sports from the stands, a 10x optical zoom might not be enough for the subject to fill the frame.

It was windy the first day we went out with the camera. Infact, it was so windy that when we first mounted the camera to our tripod, the wind nearly blew it over. The camera is not robust or heavy; it’s made of plastic and is very simple. Because it has a touchscreen to operate the focus, its lack of mass makes it easy to bump when trying to choose the focus point. The clouds were out, so we had nice diffused light for the first part of our shoot day, and the camera performed wonderfully. Soft even lighting made the picture shine, if you could look past the moire.

Since it was so windy, it was the perfect time to test the wind reduction option with the built-in microphone. Without it on, the audio was unusable because of the wind, but with the reduction on, although you could still hear the wind go by the microphone’s diaphragm, the problem was greatly reduced. It wasn’t a cure all for a windy situation, but it did an adequate job.

At another time when shooting, there were no clouds, no wind and an abundance of sunlight. This is when we noticed the camera’s dynamic range — or lack thereof. The sun was high in the sky, creating dark and prominent shadows. The camera didn’t have much information in the shadows with some detail left in the highlights. Because it has auto exposure, a slight change of framing and the camera would change the exposure drastically depending on the size and number of dark places in the shot. We don’t feel that anyone looking to purchase this camera would be concerned with the amount of dynamic range as it’s solely a consumer camera. If dynamic range is a need for you, this camera isn’t a viable option.

The market for 4K dedicated camcorders is pretty small at this point. The WXF991K and the AX33 are all that dwell in this space at the moment. They both have a similar MSRP with the sony being a bit cheaper at $800 and the Panasonic at $900. Their specifications line up in unison with the exception of the optical zoom and second camera.

We wouldn’t say that the twin camera is worth the added cost, but the optical zoom makes the Panasonic more flexible. Is that one option worth $100? The answer to that relies on what your are. When addressing what your needs are, decide if a long zoom range is important. If it is, then the $150 is not too much to ask for double the focal length. The twin camera is novelty at best and only fits a very slim group of user types. It’s not worth paying extra for unless you have a specific use for it.

There are a wide array of people this camera could be good for. Beginning filmmakers making simple stories at home with little to no crew who want a 4K production might be a good fit, as would he home video shooter. Because this form factor and options, it fits well into family and vacation shooting. For the YouTuber who wants to create but doesn’t want to be strong-armed into using manual controls and the social media enthusiast who needs something to produce topical daily content, the simplicity of the camera along with resolution fit well. The WXF991 would also fit the travel videographer who needs something quality and small without the high value of professional cameras but want the high resolution. Then lastly, for educators, this camera would fit into the classroom well as a teaching tool as well as a learning tool.

One group that we highly recommend this camera to is parents who want to buy a camera for young children. The option to have a child not only shoot video, but also record themselves in the process would be fun for kids and would also provide invaluable artifacts for future enjoyment.

Is this the best value you can find in a camera for around $800? No. However, it might offer the best options in its category — simple-to-use but high resolution cameras. Outside of the camcorder market, many detachable lens cameras also fit in this space, but require the purchase of a lens. If lots of manual control is your thing, then this camera is not for you. If you’re looking for something simple that makes a nice picture that will fit many different types of use, then you should consider it. This wouldn’t be the camera we’d recommend for great storytelling, but it would be good for capturing the moment.

The Panasonic WXF991K shoots 4K and has a camera you can use to film yourself while filming. In-camera tools allow for slow-mo shots, zooming after a shot has been taken and even creating in-camera dolly-like moves. The WXF991 suffers from significant moire and is more expensive than its competition, but it offers some unique value in its category. Panasonic made a camera that you can use to shoot nice, high resolution video with little to no knowledge of camera controls and settings. It just might not be for everybody. 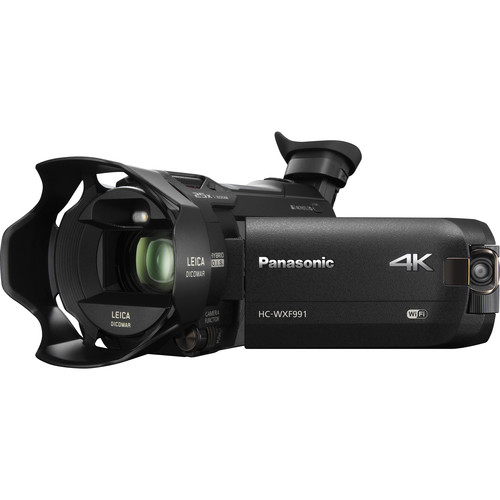 Chris Monlux can’t get to the phone right now, but if you’d leave your name, number and the time you called, he’ll get back to you. He is also Videomaker’s Multimedia Editor. Beep!