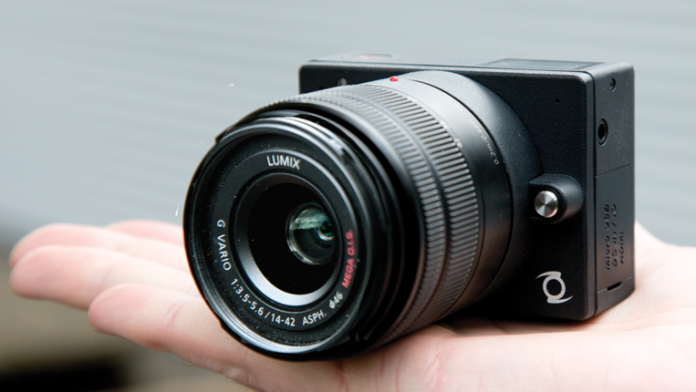 An interchangeable lens on an action camera is one of those thoughts every video producer has had in passing — that is, until you think better of it. All of the technical knowledge and process a camera operator must go through when setting up a camera with an interchangeable lens makes this pipe dream completely unrealistic. As a rule, if you have take time to setup the camera, it’s just not practical for action.

Also, the thing that makes a great interchangeable lens camera makes a horrible action camera: depth of field. Until autofocus is ultra-intelligent and responsive in terms of microseconds, an action camera with a shallow depth of field is nearly unusable. Sure, you can cinch down the aperture to extend your depth of field, but then you have to compensate by lowering shutter speed, and raising ISO — also raising mud and noise.

Then there’s the aerodynamics. It’s just not practical. It’s a very cool thought to have an action cam with interchangeable standardized lenses. Really, it is. We tried. Believe me, we tried. But amidst 4 days of shooting and re-shooting action shots with this camera, we came to one resounding conclusion: This is not an action camera. This is a micro-cinematic camera.

Oh yes, yes it is. Once we wrapped our head around this concept, all kinds of possibilities sprang to mind.

It’s absolutely perfect for small areas. Are you an independent filmmaker creating a documentary on dogs that have learned to cook? You can place the Z-Camera E1 in refrigerators, inside ovens, up on the ceiling, under range-hoods, and yes on the back of a dog, to name a few possibilities. Looking to make the next Tarantino-esque action film and get a shot from the engine point of view when your hero repeatedly slams someone’s head with the hood? The E1 is the perfect camera. Want to drive over your cinema camera — between the wheels, of course — without having to dig a huge hole in the middle of a highway and endanger your RED or ARRI?  Again — perfect. Want to strap it to your head and skydive? Get a GoPro.

It may be marketed as a UHD camera (3840 x 2160), but it will also shoot at cinematic 4K (4096 x 2160). What does this mean for you?  Everything, if you’re making a feature or short film. You can match resolutions and aspect ratios of virtually any film you’re trying to create. Although GoPro kicks this camera all around the schoolyard at being an action camera, Cinema 4K is one thing it can’t do.

Wait, we just said it’s not an action camera. Why did we just compare it to a GoPro?

The answer to that questions has to do with bit-rate. Between GoPro and the E1, the bit-rate is roughly the same. At 60Mbps this camera is pretty much a GoPro with an interchangeable lens as far as bit-rates go. It uses the same types of cards as a GoPro. The resolutions and frame rates are also extremely similar to GoPro — 240 fps at 720p, 60 fps at 1080p, etc. Wait… what happened to 120fps at 1080p? Seems strange.

In reality, it wouldn’t surprise us if many of the components south of the sensor itself are things you’d find in a GoPro. What’s strange though is as similar as it is to a GoPro, it’s just as similar to a Panasonic GH4. The color curves from the E1 sensor look very similar to a GH4, and we suspect that you could seamlessly edit footage from this camera with GH4 footage and not make a colorist pull their hair out. On that note, it’s been the word in the industry that GH4 footage and ARRI Alexa footage were very similar on color curves in “A Walk in the Woods” (2015). By relative logic, that would mean you should be able to mingle the E1 with ARRI footage.

The color curves from the E1 sensor look very similar to a GH4, and we suspect that you could seamlessly edit footage from this camera with GH4 footage and not make a colorist pull their hair out.

So why not get a Z-Camera E1 instead of a GH4? It’s certainly no replacement for a GH4 — any more than a GH4 is a replacement for an Alexa. Why? Data rates. The GH4 shoots 4K cinematic at 200Mb/s while the E1 is stuck at 60Mb/s. That means more noise, more mud, and a shallower color space with the E1.  The Z-camera E1 is not suitable as a primary camera in a professional filmmaking setting, any more than a GoPro is. It’s like this camera is the love child of a GoPro HERO4 Black and a Panasonic GH4.

So it’s not an action camera, and not a primary camera — what is the E1? Well, it’s absolutely perfect as a b-roll camera for tight places,as we mentioned before. The E1 also makes for a fantastic tool for pre-visualization, or going out ahead of the crew and block out shots — especially visual effects shots — to get an idea of how it will work.  You can show investors the basics before renting the big cameras and footing the bill for the entire crew, lights and talent.

Remember the scene in “Dark Knight” where Heath Ledger hand-held a camera, and tortured a victim as the Joker? The E1 would be perfect for something like that. We can literally think of a million and one uses for the E1 in a professional setting, but not a single one of these uses is as an action camera. And this really answers the question, is it revolutionary? Yes.

To be truly revolutionary, a product must define an entirely new market. GoPro did this many years ago with action cameras. This is the first, practical micro-cinematic camera.  It is truly revolutionary. And that’s where the problem lies.

It’s apparent that the marketing team at Z-Camera doesn’t have a firm grasp on this camera’s true potential. Their demo video is replete with beautiful drone shots and extreme sports sequences. This camera should be rejected outright for these purposes: Drone shots at 60Mb/s using a micro 4/3? Absolutely not. This camera is far behind the curve in this arena. An action camera with this much weight and bulk? No way. An action camera where you have to worry about f-stop, ISO, focus, DOF, and all the other things that come with an interchangeable lens? Uh, no thank you. Unless you’re staging every shot, and able to take a few minutes to set up each shot — forget about it. And because this camera resets the focus whenever you power it off, you can’t just set everything up, and hand it to a skydiver and say, “power it on and hit record.”

Yet, all of the shots on their website are either drone or action. It hasn’t hit the market fully yet, and this author believes they’re risking a huge backlash by marketing to the wrong people.

Exactly what did we do?

As we said before, we tested this camera as if it were an action camera. Concurrently we’re doing a review on the DJI Inspire 1 Pro. The very first shot was with the E1 mounted to a SOLOSHOT2 — a robotic tripod head that tracks a small GPS module and keeps a camera pointed at it. We flew the E1 mounted to the Inspire 1, several model airplanes, a Dodge Challenger R/T — inside and out — and we even tried a stand-up to intro the video review. None of this first day of shooting was useable. All of the shots were out of focus most of the time as we left the camera on full auto. The autofocus pulsated continuously, and the depth of field was so shallow we felt as though we were shooting with a DSLR.

On day 2, we mounted the camera to several points on a bicycle and went for a ride through glorious Bidwell Park the pride of Chico, CA. We had seen the problems with autofocus, so we closed the aperture all the way to increase our DOF to action camera proportions, and turned off auto-focus. Beginning our ride, we realized the camera was far too bulky. When mounted to the forks of the bike, the rolling shutter made roughly 80% of the footage unusable. When mounted to the handlebars, it was unsafe to ride.  When mounted to the rear of the bike, we got some usable footage, but my heel kept hitting the lens because the lens protruded so far from the camera. In fact, if you watch the video review, I try to dismount the bike, and my heel catches the camera causing me to fall over into berry bushes — the ensuing explicative was bleeped out.

When mounted to the left side of the bike with lens pointed forward and the camera sideways, the weight of the lens kept making the camera back off the screw mount leaving the camera pointing at the ground. There was no way we were even going to try mounting it to a helmet. We did get some usable footage, but because we had to clamp the aperture, the footage was very noisy and muddy.

For day 3 and 4 we finally realized what the camera truly is, and set it accordingly.  Autofocus was turned off, and the aperture was set to a reasonably small opening to allow for a large depth of field. We shot with it as if it were a stripped down DSLR. We again tried the SOLOSHOT2 with it, and got some very usable footage. On day 3 we set up for the review portion of the video, and then powered off the camera after setting the focus, aperture, etc. When we powered the camera down, the focus reset. When we got the footage into editing — well, frustrating doesn’t begin to cover how we felt.  On day 4 we re-recorded the interview portion of the review with the camera  — never powering it down.

After everything you just read, you might ask: would you buy it? Yes. This may shock you. All of the problems stated above are not because of the camera having a shortcoming of any sort. The problems have to do with how it is being marketed and talked about. This is absolutely in no way, shape, or form an action camera. By definition, an action camera must be ready on a moment’s notice. You don’t get a second chance with action. You can’t do a re-take. There are just too many things that can go wrong with an interchangeable lens action camera. Please, if you’re reading this review, Z-Camera, rethink your marketing. This is not an action camera. It’s a micro-cinematic camera. And in that context, it’s an amazing piece of machinery.

My primary gripe with the camera itself is that I don’t want to return it to my editor. We can see so many uses for this camera — from bullet time arrays, to motion capture studios, to previz, to destructo-cams, extreme angles, POV cameras, inexpensive Steadicams, etc It’s not a primary camera. It’s not an action camera. It is truly revolutionary, and will sit in my gear bag firmly between my GoPros and my GH4.

Ty Audronis is a professional in the Television and Film industry for over 20 years. He’s worked in every facet of production, and post production in network television, film, and advertising.