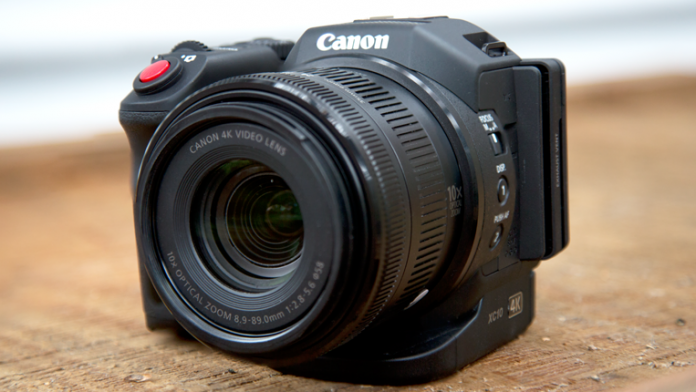 When  it comes to professional videography, 4K is quickly becoming standard. If you’re in the market for a compact, portable and lightweight professional video camera that shoots 4K internally, and offers 12 Megapixel digital still photography, then the Canon XC10 may be for you.

Canon has finally introduced a camera that can shoot 4K internally at a price that won’t break the bank. It’s clear that Canon designed the all-in-one XC10 to meet the needs of a wide range of video and still production needs.

This camera is for everyone from next-generation enthusiasts and professional videographers to filmmakers needing an economical “B” camera, to multimedia journalists with cross media needs. The small size makes the XC10 perfect for run-and-gun type applications such as events or documentaries where bigger, more complex cameras may prove impractical.

The XC10 produces the quality of images we’ve come to expect from a Canon camera, even considering it has a fixed lens and a one-inch sensor. Although this camera has many great features, did the XC10 bite off more than it can chew? Let’s look more closely at the camera features, as well as the good and bad of the XC10.

With the lens hood and viewfinder installed, the XC10 does have a distinctive, out-of-the-ordinary design which is sure to stir your interest. Ready to shoot 4K right out of the box, the XC10 will surprise you by its compact and lightweight design. The footprint is close to smaller cameras from Camera’s EOS line, such as the 7D Mark II or the 6D.

In addition to adopting a similar, rotating freestyle handgrip as found on the C300 and C100, the XC10 also sports a familiar button layout inherited from its predecessors. The small size of the camera, along with the freestyle handgrip, make the XC10 easy to hold for freehand shooting.

All of the buttons and controls are easily within thumb or finger reach — even for those with small hands. That being said, there wasn’t quite enough room for your fingers to wrap around the handgrip entirely.
Unlike the larger Canon cinema cameras, we were disappointed with the XC10’s shortage of external buttons, which means for most of the controls you’ll need to access the function menu. This can be especially painful if you have the provided viewfinder installed, blocking the LCD touch screen.

A CFast 2.0 card slot allows 4K video recording at an astronomical 205 and 305 Mbps. For day-to-day photo and video recording at 35 and 50 Mbps in 1080p, there is an available SD card slot; which begs the question, why can’t we shoot 1080p onto the CFast card?

Every XC10 comes with a few goodies included: an RC-6 wireless remote control, a 64GB CFast 2.0 card, as well as a card reader, a lens hood and a viewfinder for the LCD. The LCD does articulate up and down, but not side to side.

We field-tested all of the XC10’s various features from zoom to focus, image stabilization to picture quality, on camera audio system and everything else we could investigate.

The zoom ring operates very smoothly, and feels sturdy and robust — very much like the quality of an L-Series lens. The rotation angle for the zoom ring is approximately 71 degrees, which allows for rapid manual zooming. Since the XC10 is being marketed as a camcorder, we would have liked there to be a variable-speed zoom control. On the up side, there’s always room to crop when shooting in 4K and producing in 1080 to allow faux zooms.

The manual focus ring is well built and feels much like Canon’s L-Series line of lenses. Unlike Canon’s interchangeable lenses, the lens on the XC10 uses focus by wire, so it’s very much electronic. You’re not going to be able to rely on muscle memory to rack focus.

Auto focus worked a lot better than expected. It nailed the focus 99% of the time, and when it didn’t, it was due to user error. With a simple tap on the screen, you can change the point of focus — a great alternative to using the one-button push autofocus.

The touch-focus on the LCD works exceptionally well, but is still imperfect. Changing the focus via the touch screen doesn’t seem to have the same look and feel as when done via the focus ring — it felt somewhat jittery and digital.

The XC10’s face tracking mode, perfect for single-person productions, walk and talk interviews, or web producers, also worked exceptionally well. The quick and accurate autofocus means within a second or two after stepping into the camera’s view, it’s located and focused on your face, even with other moving subjects further in the background.

Focus range and distance scale indicators were notably missing from the XC10’s lens. However, there is a distance measuring tool located on the already busy display.

Image stabilization was very impressive. The XC10 has both optical and electronic systems for image stabilization, which made for shoulder-rig caliber steadiness while simply being handheld.

The XC10 has both optical and electronic systems for image stabilization, which made for shoulder-rig caliber steadiness while simply being handheld.

There are three different modes of image stabilization to choose from: dynamic, standard, and powered. Being able to go entirely handheld with a two pound camcorder, means you can shoot an entire project in the time it takes another shooter with a large camera and a big dolly to just capture a couple shots. Even when all the way zoomed in, the footage you capture with IS turned on feels totally natural and is fit for use in professional applications.

The audio capabilities on the XC10 are slightly better than those of DSLRs or mirrorless cameras, but somewhat weak compared to other dedicated camcorders for the same price. There is a decent built-in stereo microphone which delivers 48 kHz 16-bit audio recording, but who really uses a camera’s built-in mic for professional productions?

The manual controls allow users to adjust the incoming sound levels to suit their needs. There’s also a mini-jack input on the body of the camera which allows users to connect an external microphone such as a wireless lav transmitter or shotgun mic. Inside the function menu there are automatic and manual controls for either the built-in mic or an external mic. Finally there’s a 3.5mm headphone jack, so you can monitor your audio.

We tested the mic input using a sennheiser G3 wireless microphone system. The preamps are noticeably better than a Canon DSLR — with better signal to noise ratio, plus features not found on DSLRs such as built-in compressors, attack, and variable frequency response options. Being marketed as a professional camcorder, the XC10 is missing XLR inputs; however, there’s always the option of adding an aftermarket XLR adapter such as a juicedLink Riggy Assist, which does add to your overall investment.

The most important feature to note about the XC10’s video is that it captures 4K internally — something missing from smaller Canon cameras until now. This camcorder features a 1-inch, 12 Megapixel CMOS sensor with 12 stops of dynamic range with both video and still shooting capabilities.

Along with a newly designed sensor, the XC10 has a Digic DV 5 image processor providing the power and speed that enables 4K video capturing at variable bit rates, fast frame rate options, accurate autofocus and image stabilization. The XC10 can record 4K video to a CFast 2.0 card at up to 305Mbps, using Canon’s newly developed video format XF-AVC. With the included 64GB CFast 2.0 card, you’ll can record about 28 minutes at 305 Mbps. You can also record full HD video to an SD card at up to 50Mbps.

The XC10 records with pro-standard 4:2:2, 8-bit color sampling, which gives it a leg up against many of its rivals in the 4K arena. There are several different built-in picture profiles to choose from including, the most important of which is Canon Log, which sets the camera for wide dynamic range, wide exposure latitude and flat colors for maximum control in post-production. This is the same log curve implemented by both the C300 and C500, which is why this camera will find plenty of work as a B-camera. With image settings compatible to the Canon Cinema EOS cameras, the XC10 can easily match the look of the video captured by these cameras.

Canon must have heard our cries for more frame rate options. 120 frames per second is available in 720p — which means you can turn a one-second shot into four seconds or more depending on your project settings. Being able to record in 120 fps at 720p, and 60 fps at 1080p allows users plenty of flexibility in post. In addition to slow motion options, there are also fast motion capturing options available. With the x1200 fast motion setting, you can turn a 20 hour clip into 1 minute! More realistically, users may use the x2 or x4 speed options to acquire video time-lapse shots.

With respect to low light, the XC10 performed about what you’d expect from a 1-inch sensor. It didn’t impress, but it wasn’t flat out horrible either — roughly comparable, surprisingly, to the Canon 6D, which has a full frame sensor.

Unfortunately, many commonly used settings, including shutter speed, ISO, white balance, ND filter, image stabilization, mic level and more, are controlled from within the function menu. We found ourselves spending a lot of time maneuvering through the menu. You’ll be constantly scrolling, clicking and tapping your way through this menu to change most settings, which is cumbersome, but it does get easier with experience.

The XC10 has a dedicated photo mode which can be accessed by a simple flick of a switch. With resolution up to 12 megapixels, the XC10 captures stills using a mechanical shutter. The XC10 also boasts neat features such as time-lapse controls, built-in filters and various aspect ratios. If you need more light, a Canon speedlite or other flash can be attached to the hot shoe mount. There are also built-in controls for time-lapse, and unlike the video time-lapse mode, this mode does take pictures at a chosen interval.

All things considered, we believe the XC10 will have its place in the market — run-and-gun event shooters, multimedia journalists, documentarians — as a secondary B-camera — and the occasional weekend warrior. The image quality is as good as you would expect from Canon, but it’s lacking in other key areas necessary for a camera that puts video first, such as audio and dedicated controls for shutter and ISO. We would have prefered more physical controls, more assignable buttons and a couple XLR inputs.

All that said, the fact of the matter is the XC10 has great picture quality, is compact, and is all-in-one. We’re excited to see what’s next from Canon now that they are making their 4K cameras more affordable and more approachable.